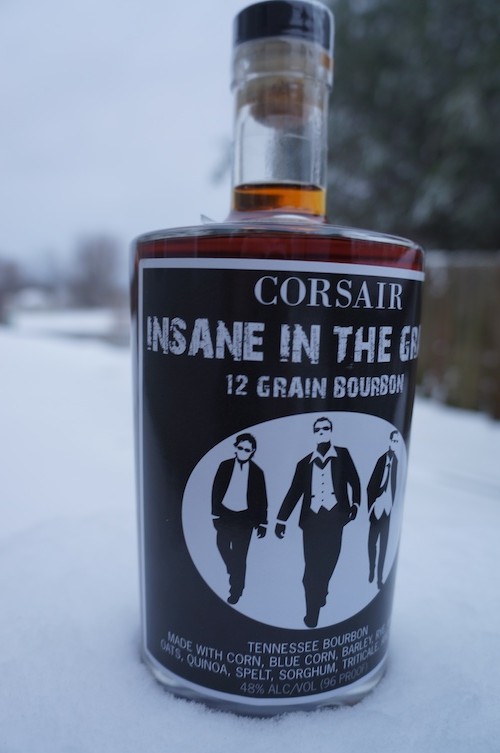 “Insanity and brilliance” come together in one bottle to redefine the taste and approach to Bourbon as we know it.  BourbonBlog.com reviews Corsair Artisan Distillery‘s Insane in the Grain – 12 Grain Bourbon.

Watch the video review above and read the expanded tasting notes below as we take time away from the snow to elaborate.

We’re tasting the “Batch One Bottling” of this “alternative grain” style Bourbon which is only available now in Kentucky and Tennessee.

Corsair Artisan Distillery is one of the most talented and innovative craft distillers that we’ve watched grow over the last several years.

In 2012, Corsair Craft Distllery won both the “Craft Distillery of the Year” and “Innovator of the Year” in the Icons of Whiskey Awards.

They also won 18 awards at ADI’s 6th Annual Judging of Artisan American Spirits in 2012 and around 44 total medals at international spirits competitions just this past year.

Since their beginning in 2007, Corsair has experimented with well over hundred mashbills for whiskeys and Bourbons. Corsair co-founder Darek Bell’s book Alt Whiskeys chronicles the unique recipes that have been a key to Corsair’s success.

Insane in the Grain is among the most complex flavor journeys ever reviewed on BourbonBlog.com and one of the most interesting releases to date from Corsair.

This Bourbon “pulls all of Corsair’s previous grain experiments together to form an intricate whiskey” according to the label.

This particular bottle we’re reviewing is hand numbered #42 of 69, produced at their Nashville, Tennessee Distillery and selected by Corsair co-founders Andrew Webber and Darek Bell.

After you watch the video, please note that the correct way to pronounce “Triticale” is “trit-ih-KAY-lee”.

Insane in the Grain Bourbon Review

Bourbon: Insane in the Grain Bourbon

Nose:  While I start my review in the video calling this nose a “lovely commotion of smoke,” the commotion of aromas is a welcomed one.

So much happening in this nose, it is difficult to determine which to follow. Take a breath and this will lure the enthusiast in for more.

Toward the end, a harmony of grains unite for an insanely delicious flavor.

You’ve heard of the “Brain Freeze” and the “Head Rush”…this is what we like to call the “Grain Rush.” Yeah, without the ice.

The most intriguing part of reviewing a well-thought craft whiskey like this one is the ability to discover new flavors every time you return for another pour.

3 Responses to “Corsair’s Insane in the Grain Bourbon Review”