Wild Turkey Master Distiller Jimmy Russell has told BourbonBlog.com in numerous interview that Russell’s Reserve Bourbon is what he drinks for pleasure most regularly. This is a pleasurable Bourbon indeed and quite friendly to cocktails, as we made a few the creations of the “Stimulus Package” with it. Our review…

Notes: Russell’s Reserve was originally introduced as a limited edition Bourbon by Wild Turkey in the early 2000’s, then officially released under a different bottle label in 2005 (see prior bottling photos below). This past year, Wild Turkey released it under the current bottle pictured left. Master Distiller Jimmy Russell and his song Eddie believe that 10 years is a near perfect aging

Nose: Prevalence of vanilla, cinnamon toast, touch of caramel and some oak.

Taste: A warming elixir with the a balance of sweet nuttiness, sugar cane, hints of cinnamon and some oak. Russell’s Reserve has some thickness on the mouthfeel rounded by the sweetness.  The very smooth and approachable nature becomes a good friend to the palette and will keep you pouring. 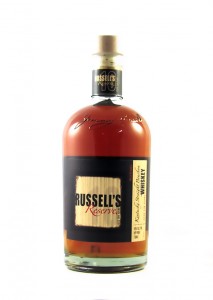 Russell’s Reserve Bourbon as released in early 2000’s as limited edition below. 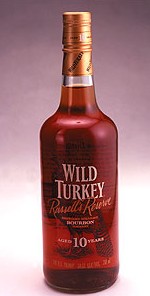