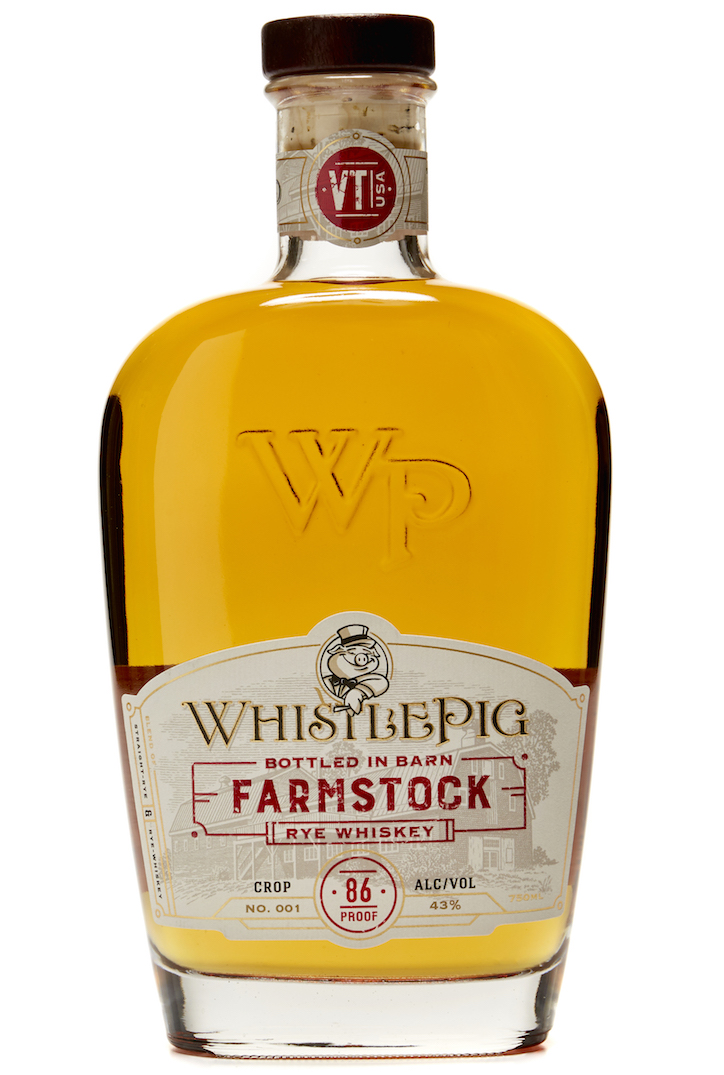 This week, WhistlePig will release FarmStock, a new, limited edition expression showcasing the first release of WhistlePig’s own aged Vermont rye whiskey at 1.5 to 2-year-old blended with two older ryes including a 12-year-old from Indiana and 5-year-old from Canada. 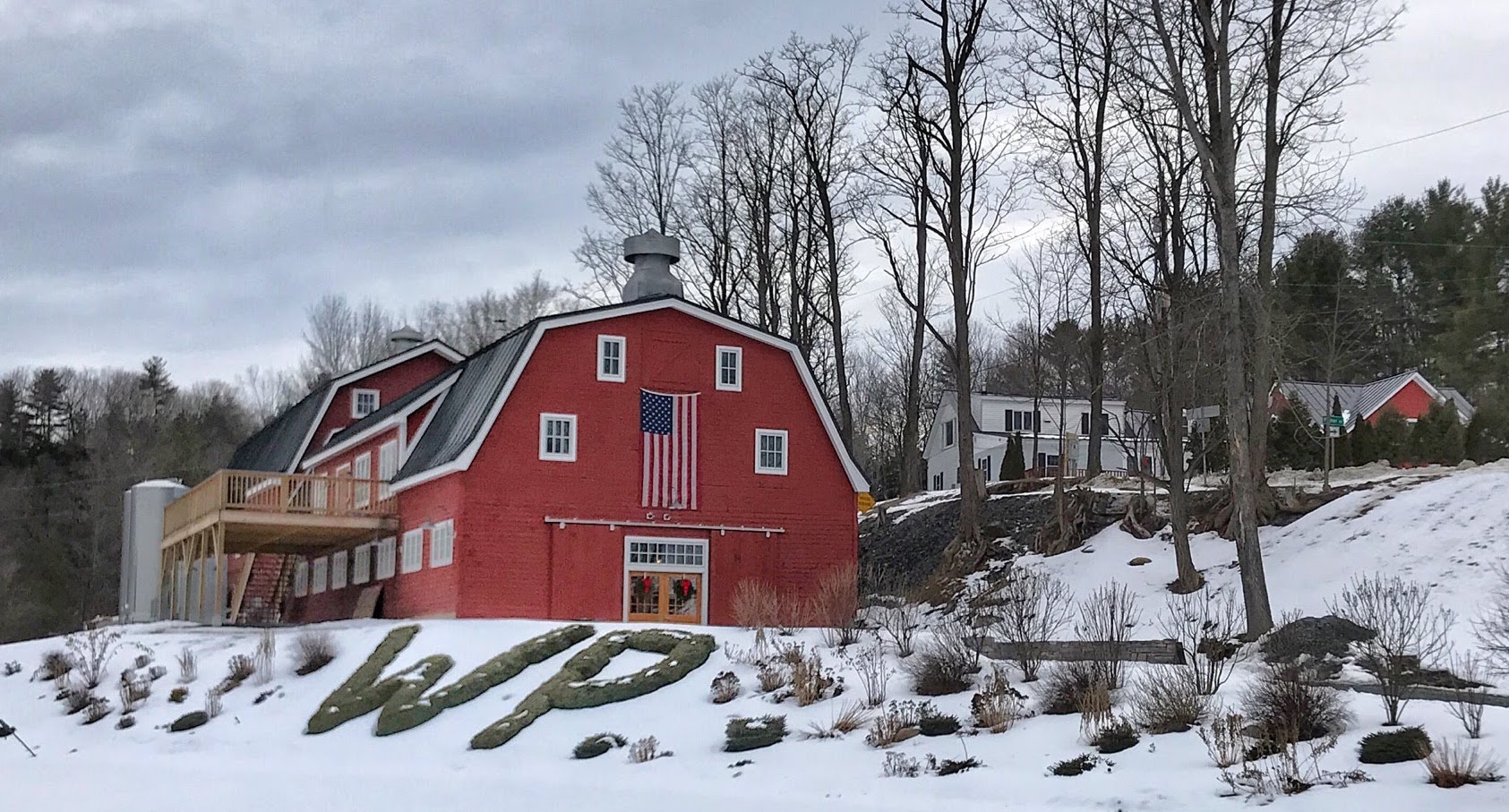 I visited the WhistlePig Estate Distillery and Farm in snowy Shoreham, Vermont as the brand invites BourbonBlog.com to be the first media outlet to have the premiere taste and exclusive story.

The two interviews in this article share two perspectives on FarmStock. Listen to my podcast interview above with founder Raj Bhakta. Bhakta discusses how FarmStock is the manifestation of the dream that launched the company.

Additionally, Connor Burleigh, WhistlePig Operations Manager and I sip the FarmStock on camera at the Vermont distillery and give our thoughts in the video below.

As BourbonBlog.com was first to bring you news of WhistlePig Old World 12-Year-Old and 15 Year Old Vermont Estate Oak Rye Whiskey, we are honored to take you on a new journey with us as we experience FarmStock Crop No. 1. 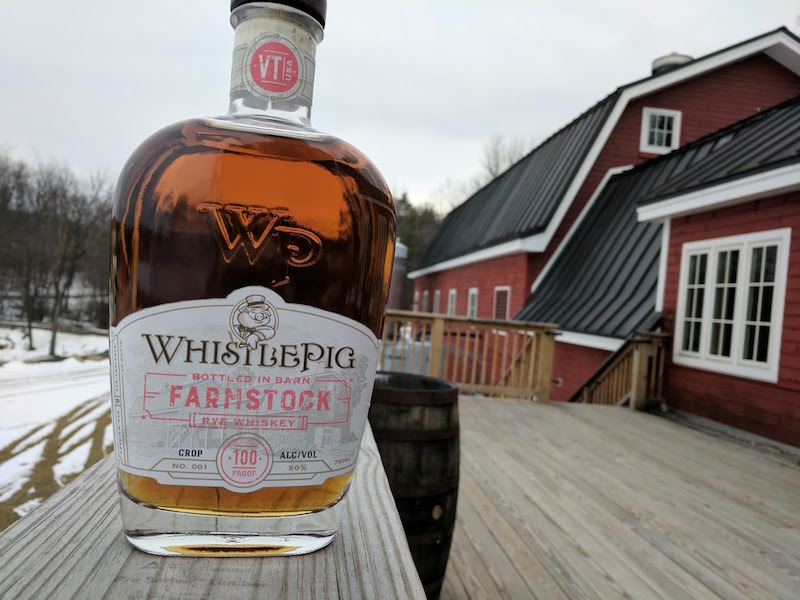 This historic release of FarmStock is the inaugural preview of the “Triple Terroir” concept that has long been the vision of Raj Bhakta and the brand.

Triple Terroir means whiskey made from grain they grew on their farm, aged in barrels made from wood grown on their land, and proofed with water from their own well. The label reads “Bottled in Barn.” Of course, this is giving a tip of the hat  to “Bottled in Bond.” The barn they’re talking about here is a 150-year-old dairy barn which they’ve transformed into their distillery.

As WhistlePig’s popularity helped to create a category of “luxury rye,” WhistlePig has always embraced both their vision of making their own rye along with the real story of the original rye that starts its journey in Canada.  Before a bottle of WhistlePig 10-year-old is even pulled from a case, the side of their 6-pack whiskey cases tell the story “Rye rescued from its cringeworthy misuse as a blending whiskey.” (Read in full side of box in photo at bottom of story). 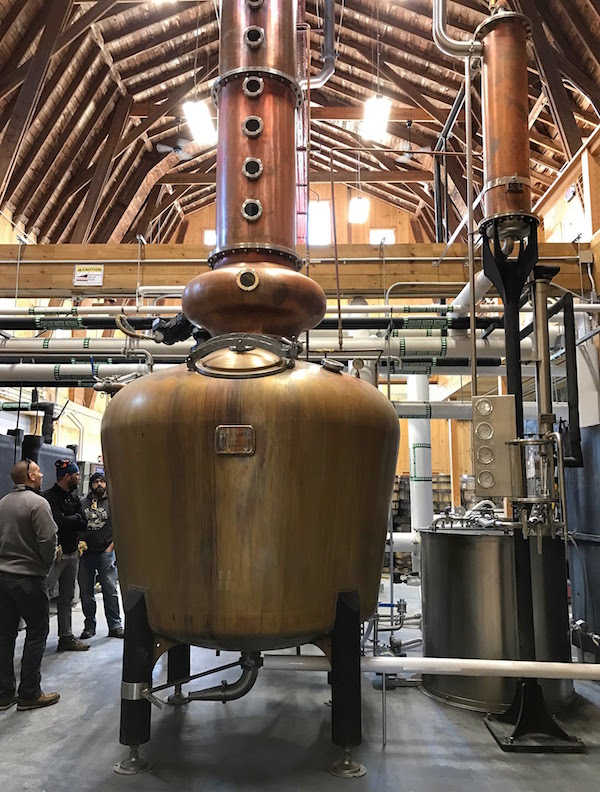 FarmStock symbolizes both WhistlePig’s history and continued momentum in one bottle.

This well-thought blend of FarmStock includes 20% 1-year-old rye from WhistlePig, 49% 5-year-old from Canada and 12-year-old from Indiana. Some distilleries and brands often rely on older expressions in blended whiskeys to mask imperfections or hide flavors of the youngest whiskeys.

With FarmStock, WhistlePig’s goal is to actually highlight the untamed and lively notes of their own whiskey balanced by the older expressions.  Each sip can be thought as how their whiskey tastes in this era and how it will taste in the future all in one glass.

NOTE: The photos in this story that show proof to be 100 are from early test bottles that we photographed while visiting WhistlePig. The official label showing the the proof of 86 is the correct proof. The proof of the whiskey as it is being released this week is 86 proof (43% ABV). 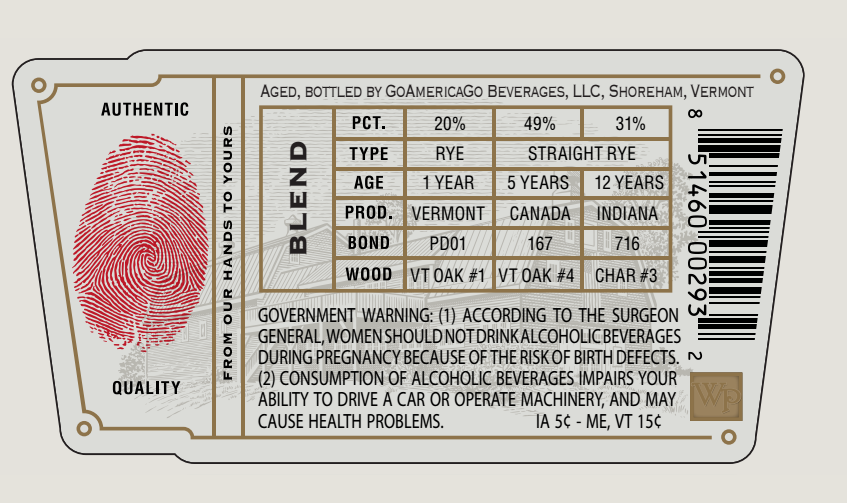 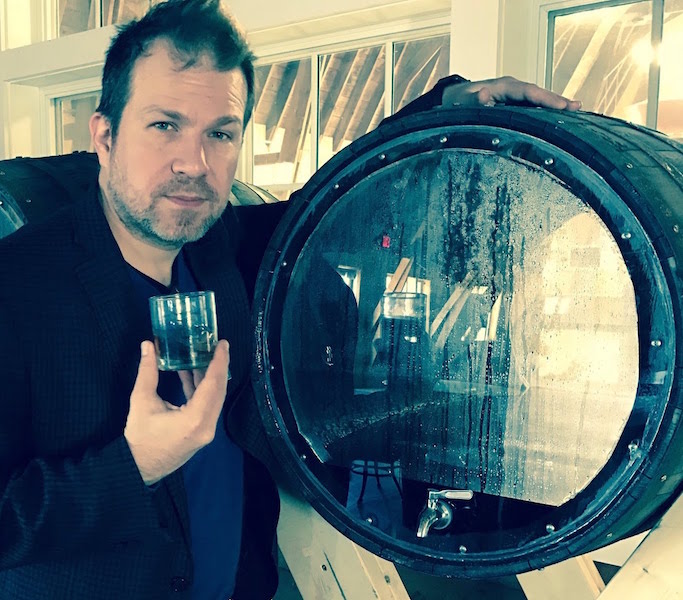 FarmStock’s flavor and complexity is one of the most balanced I have tasted in whiskey that sets out to achieve layers of youth and age.

During my stay at the distillery, I tasted the 1-year-old Vermont whiskey by itself along with several iterations of the FarmStock experiments.  The final version of Crop No. 1 is a testimony to the passion of the entire WhistlePig team along with the talent of Master Distiller Dave Pickerell.

My full whiskey review and tasting notes are below.

Subsequent FarmStock Crop expressions will be released on an annual basis and will feature WhistlePig’s own aged rye at older age expressions as they evolve. This will continue until such time that a 100% WhistlePig “Triple Terroir” is ready for bottling.

“For people who enjoy following an evolution of a brand at different tastes, FarmStock will be an amazing opportunity to pick up each crop as they come out,” explains Bhakta.

Bhakta says that FarmStock Crop No. 1 could become a collector’s item in time. Thus, he recommends buying one to drink and one to hold onto. The core collection of 10-year, 12-year, 15-Year and limited edition Boss Hogs will continue to be offered.

This limited release of FarmStock Crop No. 1 bottled at 86 proof has a suggested retail price of around $85. FarmStock will initially only be available in Los Angeles, San Fransisco, and Chicago and at the distillery.

According to Bhakta, there will only be a “couple thousand cases maximum” released of FarmStock Crop No. 1. 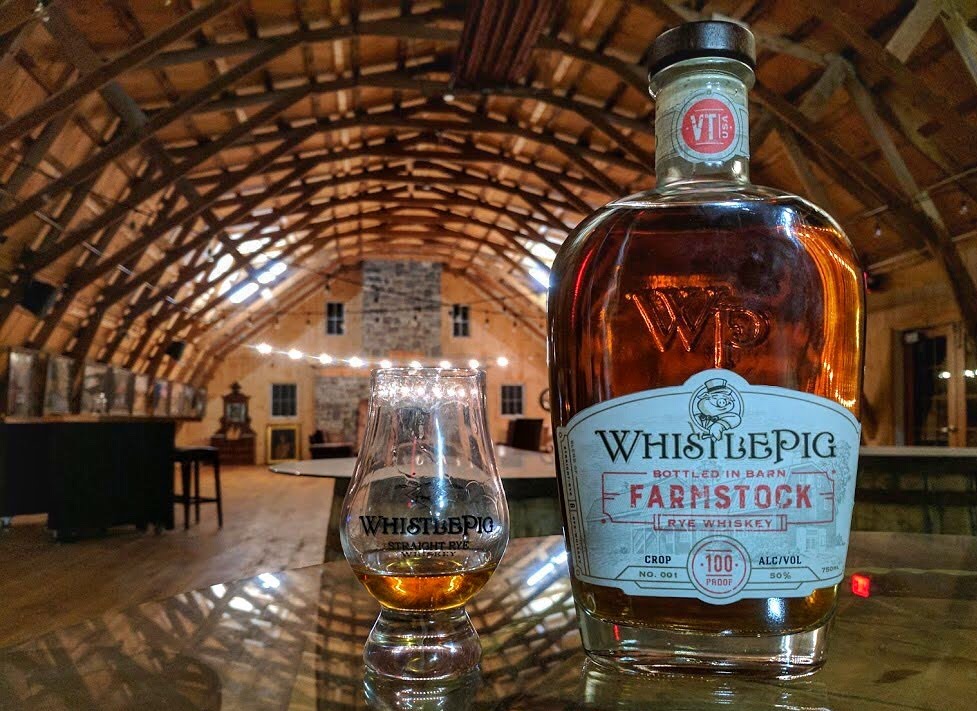 TASTE: The entry is zesty rye and youthful rye notes. Some citrus and stone fruits which become crème brûlée. Cinnamon and vanilla are also apparent. There is a flavor journey with definite levels tasting the youth, age and harmony of all the ages on FarmStock.

Similar to the 10-year-old WhistelPig and other expressions, there is a definite degree of elegant flavor. 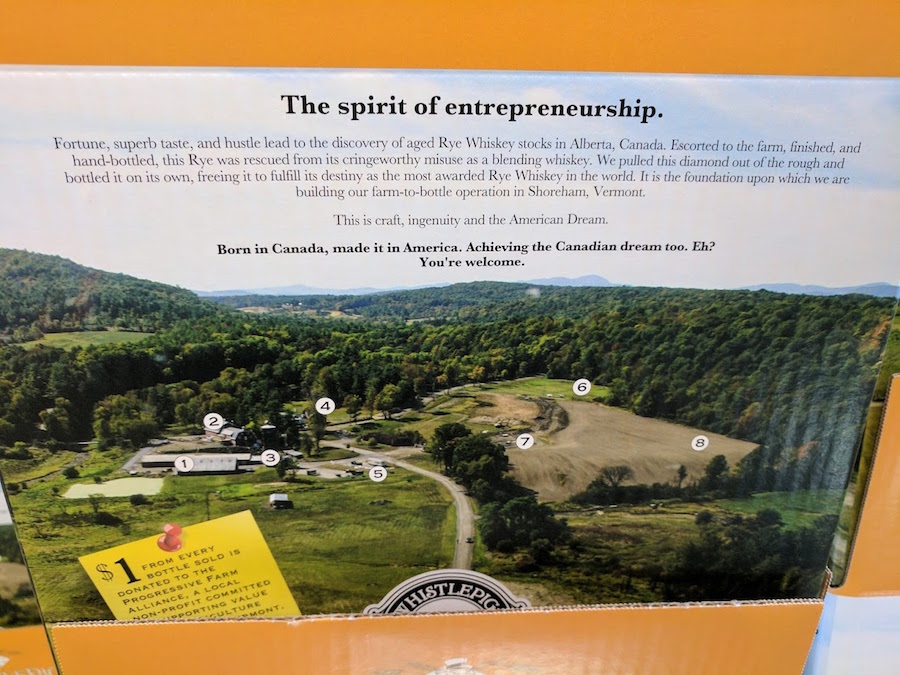