Old Limestone mixing water, used as a splash or in ice cubes for bourbon, is the first bottled water to be sourced from an ancient limestone aquifer that runs underneath the Kentucky bluegrass region, the same aquifer that has drawn bourbon distillers for centuries.

As water passes over limestone, iron is filtered out producing a sweet-tasting mineral water. In addition to improved taste, the removal of iron prevents bourbon mash from turning black making it a sought after resource for distillers. 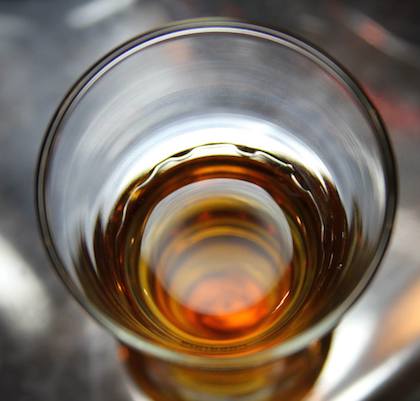 sold in a 750ml French pure flint glass bottle ($9.95) and a 1L PET bottle ($3.95), can be purchased at oldlimestone.com and select retailers throughout the country.

Old Limestone tells us their water is also used by coffee, iced tea and lemonade enthusiasts and as a mixer with vitamins like EmergenC.

“Not only does Old Limestone have a smooth feel on the palette, it’s iron-free, allowing it to bring out the true flavor and aroma of bourbon without altering it,” Old Limestone Founder Douglas Keeney tells BourbonBlog.com. “If you’re going to invest in a high-end bottle of bourbon, why wouldn’t you complement it with a quality mixer?”

Old Limestone Mixing Water carries the slogan “The Official Companion of Kentucky Bourbon.”Keeney says it is first bottled water sourced from an ancient limestone aquifer in Bourbon country known for its iron-free properties.

Learn more about unique Bourbons and products to enhance your whiskey experiences by subscribing to our Bourbon Newsletter.