Five of the 10 defendants in accused in the “Great Bourbon Syndicate” pleaded not guilty to various charges. Their attorneys raised concerns about pretrial media publicity and indicated they may be challenging the search warrant that first led to stolen bourbon in March 2015.

BourbonBlog.com has been following this story as we have dubbed criminal syndicate as the “Great Bourbon Syndicate.”

Through his attorney, Gilbert Toby” Curtsinger entered not guilty pleas for charges of trafficking steroids and organized crime. His attorney, Whitney True Lawson, told the court discovery evidence and information provided by prosecutors could likely taint a potential jury pool.Judge Wingate disagreed sand said a jury pool will be won’t be affected by media attention on the case. He told Lawson another judge told him he’d be surprised by how few members of jury pools consume news media about specific cases that come to trial.

(Curstinger and attorney pictured above).

Julie Curtsinger’s attorney Kevin Fox, said his client was unaware of several barrels authorities found behind a shed on the Curtsinger’s property. 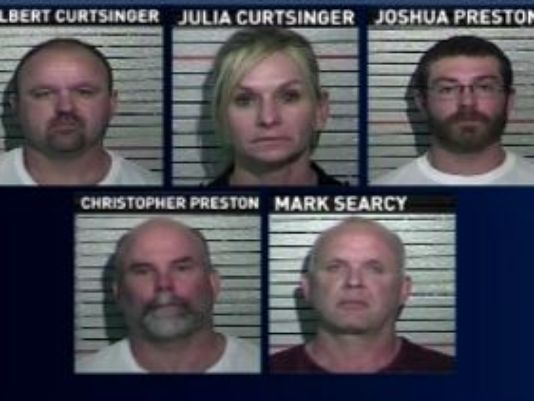 “They live on a house with 5 acres so there could be stuff all over the place,” speculated Fox. “As far as Julie goes, it is my understanding all the authorities have on  have is that she lives in the same house where all this stuff was found.”

Julie Curtsinger’s father Robert McKinney, also entered a not guilty plea. Investigators say  McKinney received a bottle of 23-year Pappy Van Winkle from his son in law that and attempted to sell it. 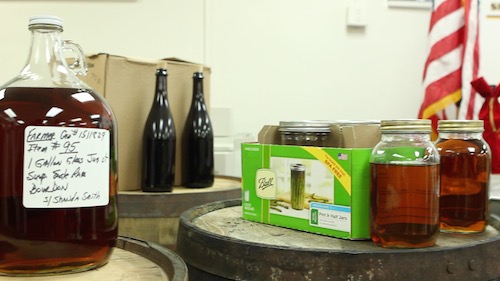 Two other defendants in “Great Bourbon Syndicate,” include Dustin H. “Dusty” Adkins and Mark S. Searcy. Searcy and Adkins scheduled to be arraigned on Friday, May 29.

No trial date has been set.

Subscribe to our Bourbon newsletter for updates on this link.