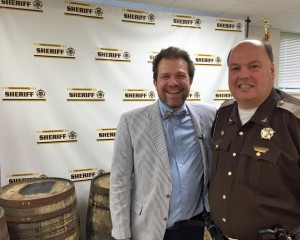 As BourbonBlog.com continues to cover the ongoing investigation and unfolding details of the Great Bourbon Syndicate, we bring you the full press conference of the major theft announcement from Franklin County Sheriff Pat Melton in the video above.

This extended video will allow those who want to learn full details about the multiple thefts and patterns of the 9 Kentuckians indicted as part of a series of bourbon thefts which date back to 2008.

For more in depth conversation on the Great Bourbon Syndicate, watch the video below as BourbonBlog.com‘s Tom Fischer was interviewed this week by a number of media outlets including CNN and Emmy Award Winning journalist Brad Bryd of WTVW and WEHT (based in Henderson, Kentucky and serving the greater Evansville and Tri-State area).

As this is an ongoing investigation and more stolen bourbon is believed to exist along with other potential members of the syndicate, report any details you know to Franklin County Sheriff at 502-875-8740 or Text to Tip Hotline 502-320-3306.

Video and photo credit for Bourbon Syndicate Story: Will Hartstock