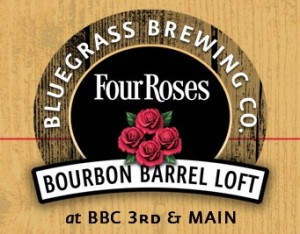 BourbonBlog.com joins Four Roses Bourbon and the Bluegrass Brewing Company (BBC) for the grand opening celebration of the new Four Roses Bourbon Barrel Loft at BBC, at downtown location on 300 W Main Street across from Yum Center in Louisville, Kentucky.

This 3,000 square-foot, $400,000 investment by Bluegrass Brewing Company is a truly a new Louisville Bourbon Bar with a upscale, contemporary location for private parties, luncheons, wedding receptions and dinners.

We speak with BBC Brewmaster Toby Hunt as well as Four Roses Master Distiller Jim Rutledge. We sample some Four Roses cocktails made with both Four Roses Bourbon and BBC Beer, as “Beertails” or “Beertinis.”

“Four Roses is an outstanding bourbon and we are pleased to be able to work with their distillery team making this a cool urban space that still has a Kentucky heritage feel,” Pat Hagan of BBC tells BourbonBlog.com.

BBC is aging some of its specialty beers in Bourbon barrels which previously aged Four Roses bourbon. We’ve been telling you about BBC Bourbon Barrel Stout beer for a long time now.

“The bourbon soaked white oak barrels will add fantastic flavors and distinct character to BBC’s beer,” Jim Rutledge, Four Roses Master Distiller tells us. “We are thrilled to partner with BBC and once again have a physical presence on Louisville’s Main Street, which is so important to the history of Four Roses and to bourbon.”

For more information on renting the Four Roses Bourbon Barrel Loft or booking events at the loft, contact Melissa Purvis at (502) 562-0007.

Video filmed by Stephen Dennison and edited by Scott Hendrickson 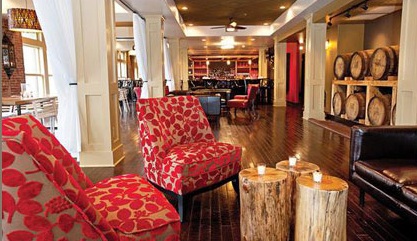