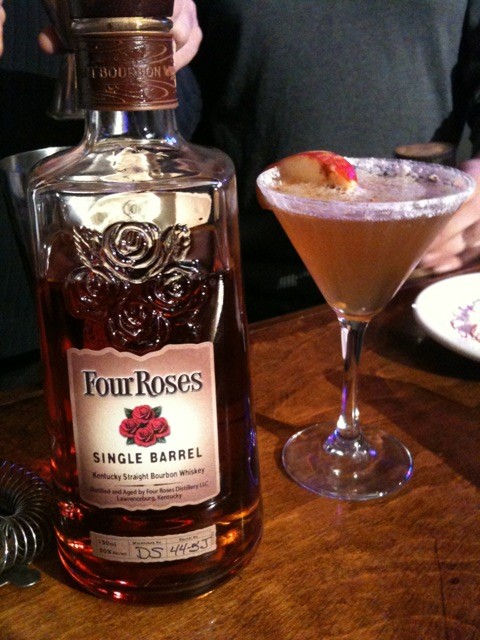 O’Shea’s Irish Pub’s Mytch Law and Chris Toler came out on top with “The Bardstown Rose,” a drink featuring Four Roses Single Barrel Bourbon, ginger ale, hazelnut and orange liqueur, a dash of cinnamon, rimmed in a martini glass with peppermint and sugar and garnished with an apple slice. (FULL RECIPE BELOW)

Avalon came in a close second with the “Winter Rose,” followed by Ramsi’s’ “Four Autumn Roses,” and Seviche’s “Shades of Autumn.”

Close to 500 votes were submitted through text message and email from Nov. 27 through Dec. 4.

Law and Toler, O’Shea’s’ “Bardstown Rose” creators, will split a cash prize of $500, receive an engraved Four Roses decanter and a plaque for their restaurant. Bartenders from Avalon, Ramsi’s and Seviche will also receive cash prizes for their participation.

Combine Bourbon, liqueurs, ginger ale and cinnamon in tin and shake over ice. Strain into a martini glass rimmed with the crushed peppermints and sugar.