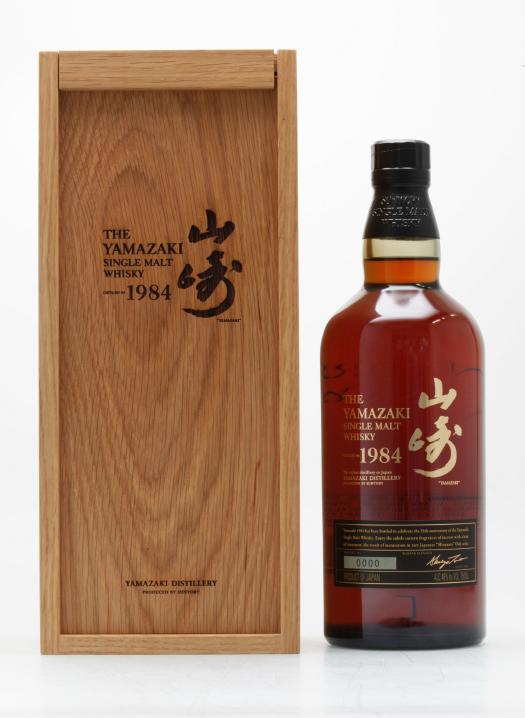 Suntory Liquors tells BourbonBlog.com that they have became the first Japanese distilling company to win the “Supreme Champion Spirit” title at the 15th International Spirits Challenge (ISC) 2010 with their Suntory Single Malt Whisky YAMAZAKI 1984. At the same time, this company achieved a second remarkable “first” for a Japanese company, as Suntory Liquors was named “Distiller of the Year.” The awards ceremony took place on Monday, November 8th in London, UK.

After YAMAZAKI 1984 was announced as a top “Trophy” winner within the “Whiskies” category, the extraordinary single malt went on to become the Supreme Champion Spirit, an accolade given to a single product among all category “Trophy” winners. As the finest of some 1,000 brands entered into the ISC this year, YAMAZAKI 1984 was cited for its “…depth of flavor and maturation, together with the remarkable syrupiness of its texture. It is absolutely outstanding in every respect.”

The additional, singular distinction of becoming the Distiller of the Year, also bestowed on Suntory Liquors by the ISC, is a prestigious honor that is given to the distiller that has endeavored to produce a rich array of high-quality products. This is not the first such highly esteemed and significant distinction received by Suntory Liquors this year; it comes on the heels of the Whisky Distiller of the Year award that was presented in February at Icons of Whisky 2010, itself another first for the Japan liquor industry.

The ISC is a liquor competition held every year in the UK, the very home of Scotch whisky. Products are divided into categories such as “Whiskies” or “Liqueur” and each category has its own Gold, Silver, Bronze and Commended Medal winners, while the Trophy is the top honor awarded to only the most outstanding products from among the Gold Medal winners of each category. The “Supreme Champion Spirit” award is then given to one chosen product from among all the Trophy winners from each category, making it the apotheosis of accolades.

In addition to this, the “Distiller of the Year” award is granted to the one distiller which has endeavored to produce a rich array of high-quality products.
The prizewinners of the “Whiskies” category are determined by unanimous votes by the ten judges who include blenders from whisky distilleries the world over and the prize giving draws the attention of the worldwide liquor industry each year.

Handcrafted at the oldest distillery in Japan, YAMAZAKI 1984 is made from the purest natural ingredients distilled through the art of Japanese craftsmanship in perfect harmony with nature. Indeed, YAMAZAKI is made with the same pure water used in Japan’s most esteemed tea ceremonies. With a rich, sophisticated character all its own, YAMAZAKI’s secret lies in the harmonious marriage of single malt matured in three different oak casks – American, Spanish and Japanese.

As the supply of casks became limited in the 1940’s, Suntory turned to making its own casks from Japanese mizunara oak. The coopers discovered the porous wood was prone to leaks; blenders found that the mizunara imparted overbearing aromas and taste to the malts stored within. But their dismay turned to delight when they discovered, after the long period of aging, the mizunara oak casks added a distinctive touch to the whisky, endowing it with sweet fragrance reminiscent of incense. The suggested retail price of YAMAZAKI 1984 Single Malt Whisky is $599.95.

The complex aromas and flavors of YAMAZAKI can be enjoyed in a variety of ways. The ideal method to appraise its rich, fruity aroma is to enjoy YAMAZAKI straight, either as an aperitif or after-dinner drink. Tasting YAMAZAKI on the rocks is an excellent way to appreciate its smoothness and flavor.

This is Japan’s First Whisky

The history of Japanese whisky began in 1923 when Shinjiro Torii, the founder of Suntory and the father of Japanese whisky, built Japan’s first malt whisky distillery in the Vale of YAMAZAKI. Located on the outskirts of Kyoto, the ancient capital of Japan, this proved to be the ideal environment for whisky production.

A good whisky is born of pure water and a climate where cool temperatures and high humidity create an ideal maturation environment. The Vale of YAMAZAKI is famed for its pure waters, prized by the famous Japanese tea ceremony master Senno Rikyu since ancient times. The YAMAZAKI distillery, where whisky was crafted from pure malt using copper pot stills, was the first of its kind outside of Scotland.

Who is Suntory Ltd.?

Suntory Ltd. is one of the world’s leading wine and spirits companies. Founded in 1899, Suntory was the first company to introduce western-style spirits to Japan. Suntory’s businesses today encompass liquor, including whisky, shochu, wine and beer; food products; soft drinks; floral products; restaurants; and sports. Suntory exports a wide range of authentic Japanese whiskies and liqueurs to 35 countries, including the United States. Made with exceptional Japanese craftsmanship, these include the unique melon liqueur MIDORI, which is especially popular in the U.S., and YAMAZAKI Single Malt Whisky, Japan’s premier single malt whisky. With its head office in Osaka, the Suntory Group comprises 170 companies operating in 17 countries.