Buffalo Trace Distillery tells BourbonBlog.com that they have released their 2010 Antique Collection. The anticipated annual collection will once again feature five limited-release whiskeys of various ages, recipes and proofs. We will review the collection in the days to come on BourbonBlog.com and here is what fans can expect from the tasting notes:

The 2009 release was named in Jim Murray’s Whisky Bible the “World Whisky of the Year,” making it the best whisky on the earth. The 2010 release is comprised of whiskey that has been aged on the first floor of Warehouse K. The first floor enables the barrels to age slowly and gracefully. This vintage has a crisp spice, minty sweetness and pleasant oakiness.

The previous edition of this bourbon was honored with a 96 rating by Wine Enthusiast Magazine. The 2010 edition was distilled in the spring of 1993 and has been aging in Warehouses C, H, I, K and Q. With 17 years of aging under its belt, it brings to the table notes of leather, vanilla and tobacco.

The perennial favorite and last year’s winner of the “Bourbon of the Year” award by Jim Murray in his Whisky Bible, the 2010 George T. Stagg was found in Warehouses H, I, K and L. This uncut, unfiltered bourbon was distilled back in the winter of 1993 and weighs in at 143 proof—some strong stuff! This whiskey tastes of dark chocolate, vanilla and coffee.

William Larue Weller is the Antique Collection’s uncut, unfiltered, wheat recipe bourbon. The 2009 edition was just named the best bourbon in the world by F. Paul Pacult’s Spirit Journal. The 2010 offering was distilled in the summer of 1998 and aged on the fourth and ninth floors of Warehouses I and P. This William Larue Weller release registers in at 126.6 proof. It tastes of caramel corn, light toffee and pipe tobacco.

Thomas H. Handy Sazerac Rye is an uncut and unfiltered straight rye whiskey. This year’s Handy was distilled in the spring of 2004 and aged on the third and fourth floors of Warehouses K, M and P. It is 126.9 proof. The flavor is cinnamon and allspice, with a bold lingering finish.

The Antique Collection was introduced a decade ago and has become a cult favorite among whiskey connoisseurs. Since 2000 these whiskeys have garnered numerous awards from such notable publications as Malt Advocate Magazine and Jim Murray’s Whiskey Bible. 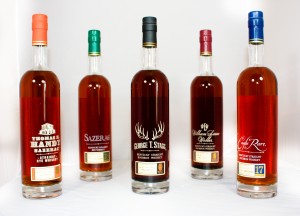 “Last year’s collection won some pretty major awards so it’s somewhat intimidating to follow those whiskies,” Master Distiller Harlen Wheatley tells BourbonBlog.com. “But we think this year’s offerings are just as good, so it will be fun to see if everyone else thinks so too.”