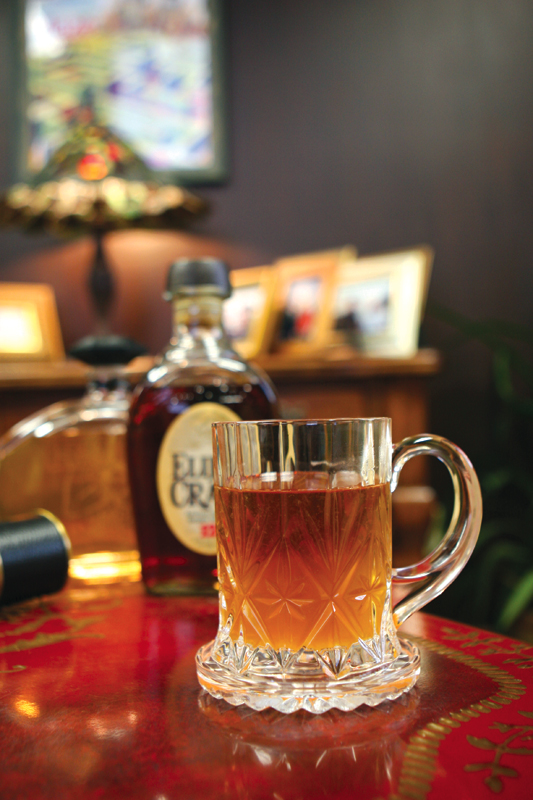 The Hot Toddy is said to have originated in 18th century Scotland as medicinal elixir to ward off the cold*, but never before has it been given a kick of pistachio along with the Bourbon it was always meant to be paired with.  We just introduced the “Dumantoddy” in the January/February 2010 issue of Evansville Living. The recipe usually calls for tea, whiskey, honey and lemon. The measurements seem to depend upon how sick one is feeling or how much one enjoys their spirits.  Mixologist Stephen Dennison and I created this using Dumante Verdenoce, an Italian made pistachio liqueur that was created by a Louisville entrepreneur Howard Sturm. We selected Elijah Craig 12 Year as the Bourbon whiskey for the Dumantoddy; it expresses the cooperage so well as it allows us to taste the oak barrels it was aged in. In place of honey, Dumante adds sweetness and adds a roundness that you only taste from this type of nut character.

Bring water to boil and allow tea to steep for 5 to 7 minutes. Add Dumante and Elijah Craig and then add juice of a quarter lemon. Rub the zest of lemon around the rim of the tea cup to add lemon nose.

*Use your own judgement as the American Lung Association recommends avoiding alcohol when combating a cold.