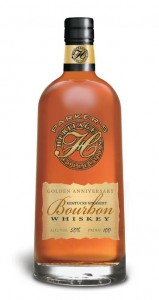 Parker Beam’s 50 years of bourbon making are celebrated in one bottle containing bourbon from each of his five decades of craftsmanship in the new “Golden Anniversary” edition of Parker’s Heritage Collection to be released in September 2009.  However, BourbonBlog.com gives you a sneak peak with a review of this bourbon by Mike Veach on this link. Aged in traditional open-rick warehouses in Nelson County, the Bourbons used to make the Golden Anniversary edition were personally selected and married together by Heaven Hill Master Distiller Parker Beam, with the majority of the whiskey aged 10 to 20 years, and much lesser amounts of older whiskey.

The 2009 release of Parker’s Heritage Collection comes on the heels of two of Heaven Hill’s most highly acclaimed whiskeys, the barrel-proof 11-year-old 2007 edition Bourbon that was named one of Malt Advocate “Top Ten New Whiskies of 2007” and placed #21 in F. Paul Pacult’s “111 Best Whiskeys, Brandies, Liqueurs and White Spirits in the World”, and the 27-year-old 2008 Bourbon that won Best of Show, Brown Spirits at the most recent San Francisco World Spirits Competition and was named “North American Whiskey of the Year” by Malt Advocate.

The Golden Anniversary edition will be offered nationally in a 750ml bottle, like the previous two Parker’s Heritage Collection releases, and will be bottled at 100 proof with an average retail price of $150. The entire production run will only number 1500 three bottle cases, which will be allocated across the country and in select international markets. 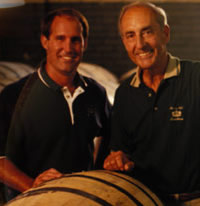 As the Master Distillers, Parker and his son Craig Beam oversee Heaven Hill Distilleries, Inc., one of the world’s most highly esteemed distilling operations.   Heaven Hills produces such renowned brands such as Elijah Craig, Old Fitzgerald, and Evan Williams, the world’s second largest selling Bourbon, are produced according to Parker and Craig’s seven-generation- old family recipe and yeast strain.

Parker Beams tells BourbonBlog.com, “I’m honored that Heaven Hill is recognizing my 50 years with this bottling, and I’m also excited that I was able to select and combine Bourbons of such varying ages.”

We will have more coverage of the “Golden Anniversary” Parker Heritage Collection coming soon.