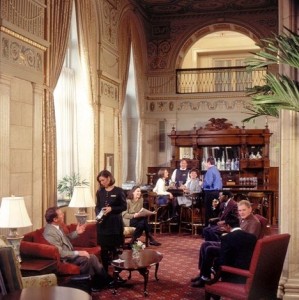 Enjoy an Old-Fashioned cocktail in the lavish lobby bar of the Brown Hotel that Southern Living Magazine describes as “straight from a 1930’s movie set”. At this treasured 1923 landmark, the famous “Hot Brown” was created to satisfy the cravings of the late-night dance crowd. Sample one for yourself, and take a browse below of a few Signature Cocktails available at The Brown Hotel Bar. The Brown Hotel Bar is on the Urban Bourbon Trail of Louisville.

Signature Cocktails
From the Lobby Bartenders

The “New Fashioned”
Our version of a classic
Made with Wild Turkey Rare Breed
Grand Marnier, Amaretto & Ginger Ale
$11

The Bourbon Ball
The Real Thing but in a glass
Maker’s Mark, Godiva Dark and Frangelico
A double splash of cream in a martini glass
$14

The Red Headed Peach
Bacardi Peach Rum, Club Soda And a double splash of Cranberry
Garnished with a zesty lime.
A low-calorie treat with lots of flavor
$9

Little Green Apple Margherita
“Like it was picked from the tree”
Patron Gold, Green Apple Schnapps, Apple Juice and a splash of sour
In a martini glass rimmed with sugar and cinnamon
$12

**Prices and items subject to change