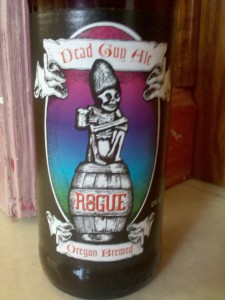 To be called dead, this Dead Guy Ale is alive with hops, bread and slight herbal-like citrus on the nose. Flavor is a honey and mild notes of buttery biscuit. There is a well balanced hoppiness and malty sweetness in the taste. Has some elements of a nice IPA. Finish is sweet. Overall the Rogue Dead Guy Ale is quite approachable with some complexity.