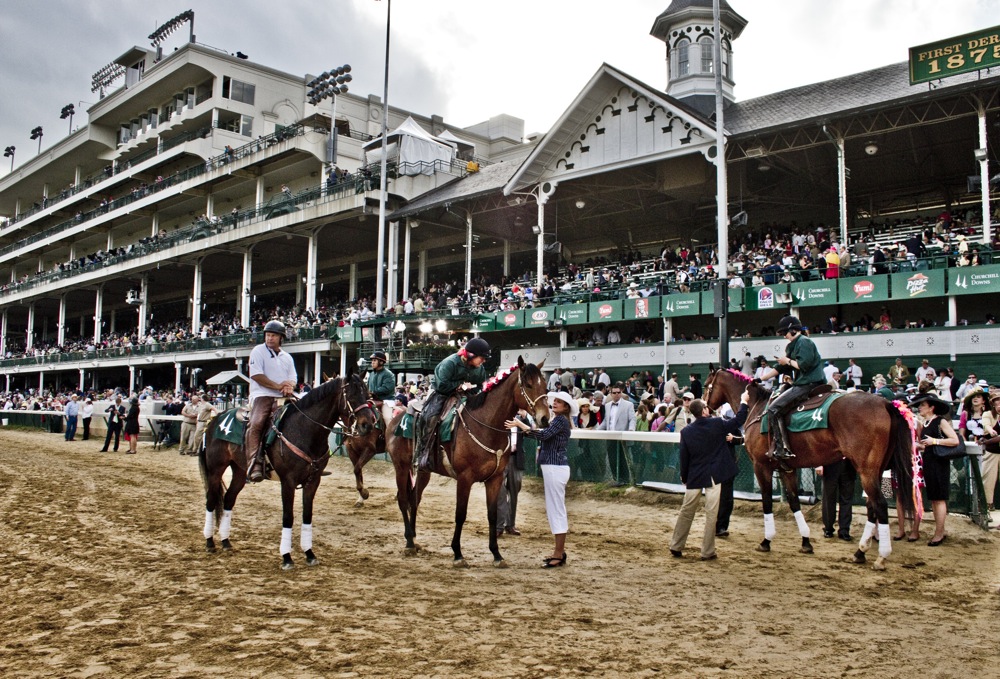 137 of them. During Kentucky Derby week this refers to: A. Mint Juleps consumed this week; B. Celebrities in sight; or C. Times the Kentucky Derby has been held.

Let’s start with a presumption that is typically correct: Those who regularly visit the Bluegrass always find a place in their hearts for our Bourbon. Celebrity chef and TV personality Bobby Flay is one of those. “Bourbon is my thing, man,” says Bobby Flay. Here is the link to our video interview with Bobby where we challenge him to a “Bourbon Throwdown.” “How are we going to do that? Age our own Bourbon or just drink it?” Bobby asks. I suggest that we see who finishes a glass of Woodford Reserve first. Yeah, that didn’t happen.

The next stop are some ever tasty innovations at the Rose Julep Contest 2011. When you’re served 14 Rose Juleps to sample and judge, it ain’t bad afternoon. Each year, Louisville mixologists creatively mix in unique ingredients as the only rule is stick with the classic mint julep base of mint, Four Roses Bourbon, and simple syrup. From a star fruit entry to a Mexican horchata themed creation, these hopeful contestants get more. The winner was Rory McCollister of Varanese who used boar bones in a root beer simple syrup (see recipe below).

The Barnstable Brown Derby Eve Gala gave us the chance to interview supermodel Marisa Miller, “The Most Interesting Man in the World” Dos Equis spokesperson Jonathan Goldsmith, Guy Fieri for his 4th appearance on BourbonBlog.com. (Check out those links for all those individual celebrity interviews). 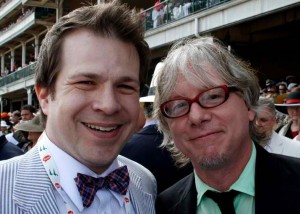 One of the best moments was on the day of Kentucky Derby 137 as a record number 164,858 people attended at Churchill Downs. Of the entire crowd, here you seeBourbonBlog.com Host Tom Fischer was quite a “Shiny Happy Person” to be right next to Mike Mills of R.E.M. Mike confirmed he loves Bourbon.

Surely it can’t be the end of Kentucky Derby Coverage as we know it? You’ll feel fine all year long until next year..just keep drinking mint juleps! 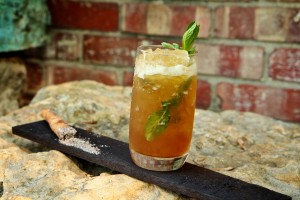 – In collins glass combine bourbon, simple and mint leaves and muddle to release mint oils.
– Add ice, transfer to mixing tin and shake. Then top with splash rootbeer and 1 oz. gingerale.
– Shake litely and transfer back to glass. garnish with fresh mint.

– Boil boar bones in rootbeer on low heat until liquid has reduced by half.
– Remove from heat strain liquid allow to cool and then strain again removing all solids.
– Add equal amount of sugar to liguid, and boil low heat to dissolve.

– lay out springrool sheet flat. Layeron chocolate and caramel.
– Roll as if it were a cigar.
– Deep fry until golden brown and then trim ends

-Combine 10cookies and 2 tbs Maltodextrin in Robocoupe.
– Blend until in looks dry or fat is absorbed