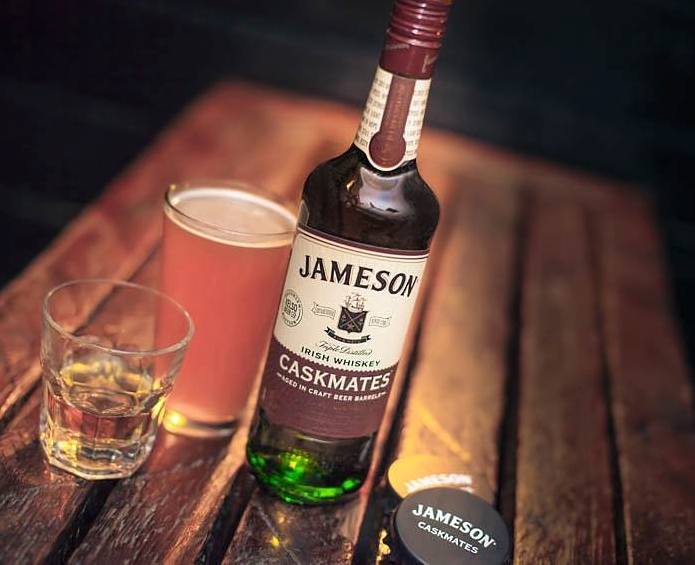 It is only one week after St. Paddy’s Day and Jameson keeps on giving whiskey fans more reasons to celebrate. In 2014, a few used Jameson Irish Whiskey barrels aged an India Pale Ale beer at KelSo Brewery in Brooklyn, New York.   After the Drinking Buddies Program was complete, KelSo sent them back Dublin for one more chance to age Jameson.

With remains of the craft KelSo beer still trapped in the barrel, it imparted its flavor on the whiskey during the aging. Thus, Jameson tell us it only made sense to make this one a Caskmates limited edition release.

The Jameson Caskmates KelSo Pale Ale Edition will be available for purchase only in New York for a limited time at the suggested retail price of $29.99 / 750 ml bottle. Available nationally, the last release of Jameson Caskmates was partnership with Cork Ireland’s Franciscan Well Brewery for the Caskmates Stout Edition.

“We thought it only right that we return the flavor and mature a special edition Jameson in the pale ale seasoned casks returned to us from the brewer. The result is a unique Neighborhood Edition Jameson Caskmates whiskey with the fresh IPA characteristics of zesty citrus, soft vanilla, hints of hops, pot still spices and sherry – a truly original finish.”

“The Caskmates concept, first imagined in a conversation in a neighborhood pub, is a product of shared passion for craft, quality and collaboration,” added Caulfield.

“We’re very excited to unveil our newest collaboration, Jameson Caskmates KelSo Pale Ale in the neighborhood of our partner KelSo. This is the smallest release that Jameson has ever done in the U.S. Looking forward, we will continue to build such relationships with craft brewers throughout neighborhoods in both Ireland and the U.S.”

Watch the video below which showcases the original collaboration in 2014 between KelSo and Jameson.