At a price of $30 per bottle, this winning spirit a must-try for anyone who enjoys Tequila or Whiskey.

One of the most interesting things about the spirit industry in recent years is that many companies are experimenting with variations on their traditional processes. The results are often surprisingly good, and Hornitos Black Barrel is certainly an example of that.

Hoping to lure market share from the growing number of whisky drinkers in the US, Hornitos decided to triple-age their 100% blue agave tequila in American Oak charred at different levels in each phase. The results are quite unique. Black Barrel’s initial flavor is clearly tequila-esqe, in the same vein as an Anejo, with jelly and herbal notes. However, the finish on Black Barrel is more like a whiskey, with notes of vanilla, caramel, and smoke.

Hornitos Ambassador Victor Martinez indicated Black Barrel was first released in Mexico and sold extremely well in that market. Now it’s being released in over 40 states and is expected to do even better in the US. This tequila would be great to sip on year-round or as a centerpiece in cocktails.

The tequila starts with 100% Hornitos Tequila, which is aged in traditional American Oak barrels for 12 months. Once the complex flavor of the Añejo tequila has been achieved, the liquid is placed in deeply charred American Oak barrels for four months to ensure that the tequila breathes through the caramelized layer of sugar, imparting a rich character and smoky notes traditionally found in whiskey.

Lastly, the tequila is aged in specially-toasted American Oak barrels for two months to impart a creamier, vanilla character to add depth and complexity. 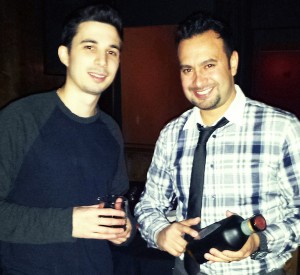