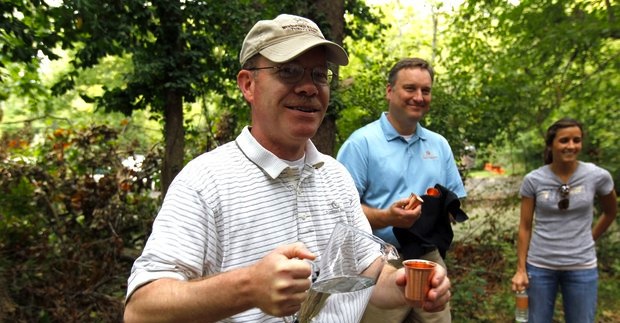 BourbonBlog.com is proud to present an article from Woodford Reserve Master Distiller Chris Morris on the 200 years of distilling on the site which is now known as Woodford Reserve in Versailles, Kentucky.

We invited Chris to prepare this especially for you, our BourbonBlog.com readers..

This past month the Woodford Reserve Distillery celebrated 200 years of distilling on its site. 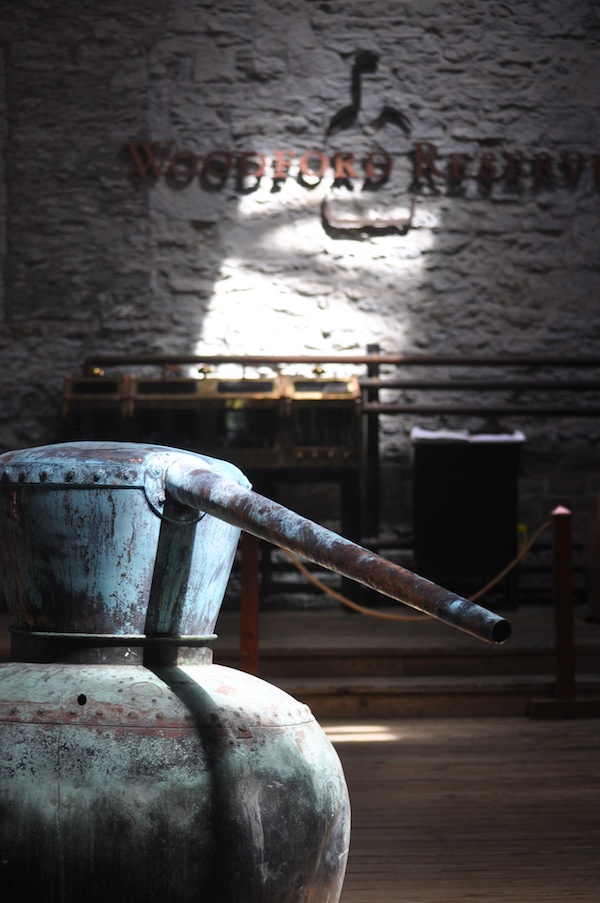 The celebration was loads of fun for several reasons. First we had to conduct research into the year 1812. How many people were living in Kentucky at the time? How did they make a living? What did they eat? What were the politics of the time? These and many other questions had to be answered so we could put what we know about the Pepper Family and their farm/distillery in Woodford County into context.

Once that research was complete we then overlaid it on our National Landmark archaeological survey. That allowed us to map out how the 1812 farm/distillery operated – and therefore we had the framework for our special 1812 Tour.

Well that was pretty hard work so our chef-in-residence, Ouita Michel, kept us refreshed with numerous dishes and drinks that were enjoyed in Kentucky 200 years ago. These we tried as the celebratory dinner and lunches were painstakingly developed.

We drank “switchel” – an apple cider, molasses and vinegar combination, “slings” – the earliest styles of what would be called a mixed drink – Woodford Reserve, molasses, water and lemon peel, and of course mint juleps. Country ham and biscuits, pickled okra and plums, cornpone, sweet potato pie and many other old favorites lent the celebration an authentic taste of the past.

Part of the Woodford Reserve team, primarily Tim, Lynne and Reva, dressed in period costume as they represented members of the Pepper Family during tours.

Kentucky Governor Steve Beshear made a formal proclamation that recognized the Woodford Reserve Distillery site as being the oldest in Kentucky. Others claim to be older but only at Woodford can the past be traced thoroughly through records and actual surviving buildings that date to 1812. 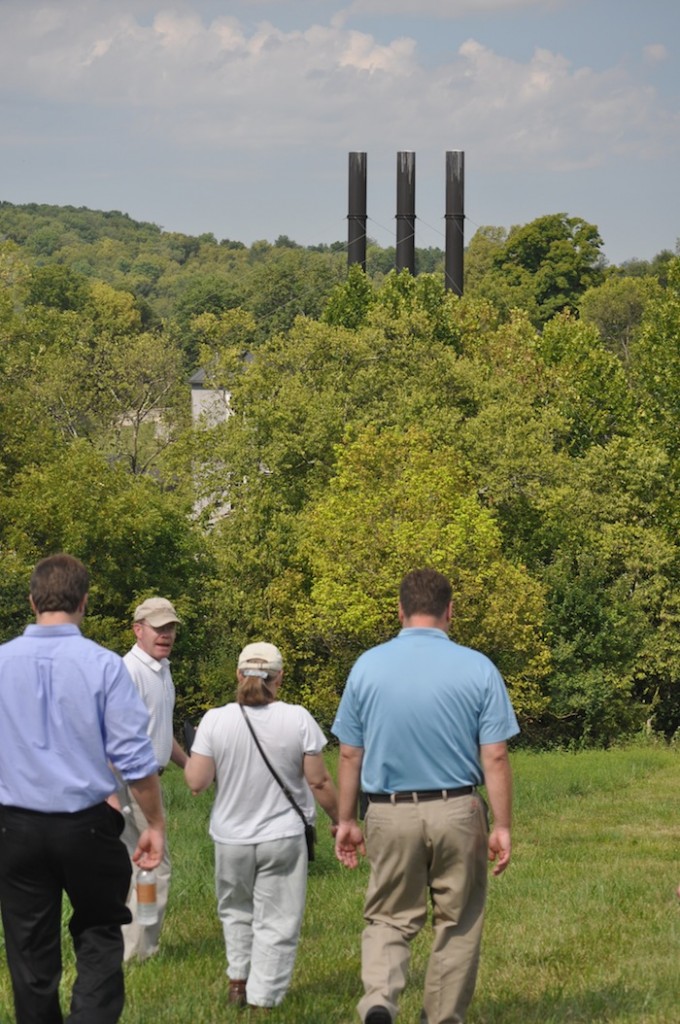 The special tours tied together all of the above. We opened up a portion of our 73 acre site that is normally not accessible to the public due to its rugged, natural setting along the steep ridge that lines the southern bank of Glenn’s Creek. There the tour included visits to the 1812 Pepper Family homestead, the 1812 spring house and the ruins of the original 1812 distillery and grist mill.

These stops included historical discussions and period appropriate snacks and drinks. Once that portion of the tour, really more of a combination history/nature hike accentuated by visiting deer, red tail hawks and other wildlife, the tour joined the regular tour path.

This, however, was enhanced for the celebration. Special signs were positioned throughout the grounds detailing how the Pepper Family crafted whiskey in 1812 for an on the spot comparison of today’s practices and procedures. For example on the mash floor a visitor learned that the original distillery used white corn while today Woodford Reserve is crafted with yellow corn.

There was also a comparison of milling practices, souring processes and much more. This type of comparison was highlighted in the still house, warehouse, water supply, scale house and mill. At the conclusion of the tour participants were treated to a tutored tasting of Woodford Reserve and Double Oaked. This was accompanied by an 1812 period lunch.

While each tour took 4 hours to complete it seemed to be finished in the blink of an eye. The response from participants was overwhelming. They often asked if the program could be repeated in the future.

The grand finale was an 1812 banquet held on Saturday night. The menu included smoked pork, roast, quail and rack of lamb. Pickled beets, okra, watermelon, corn pudding, buttermilk pie and other 1812 standards rounded out the fare. The evening included a tasting from the very first barrel distilled at the renovated Woodford Reserve Distillery.

The distillery gift shop developed several special commemorative items including an engraved 19th century julep cup and a 200th Anniversary Woodford Reserve bottle. Both available only at the distillery.

It was certainly a magic week – and it should have been since you only turn 200 once! 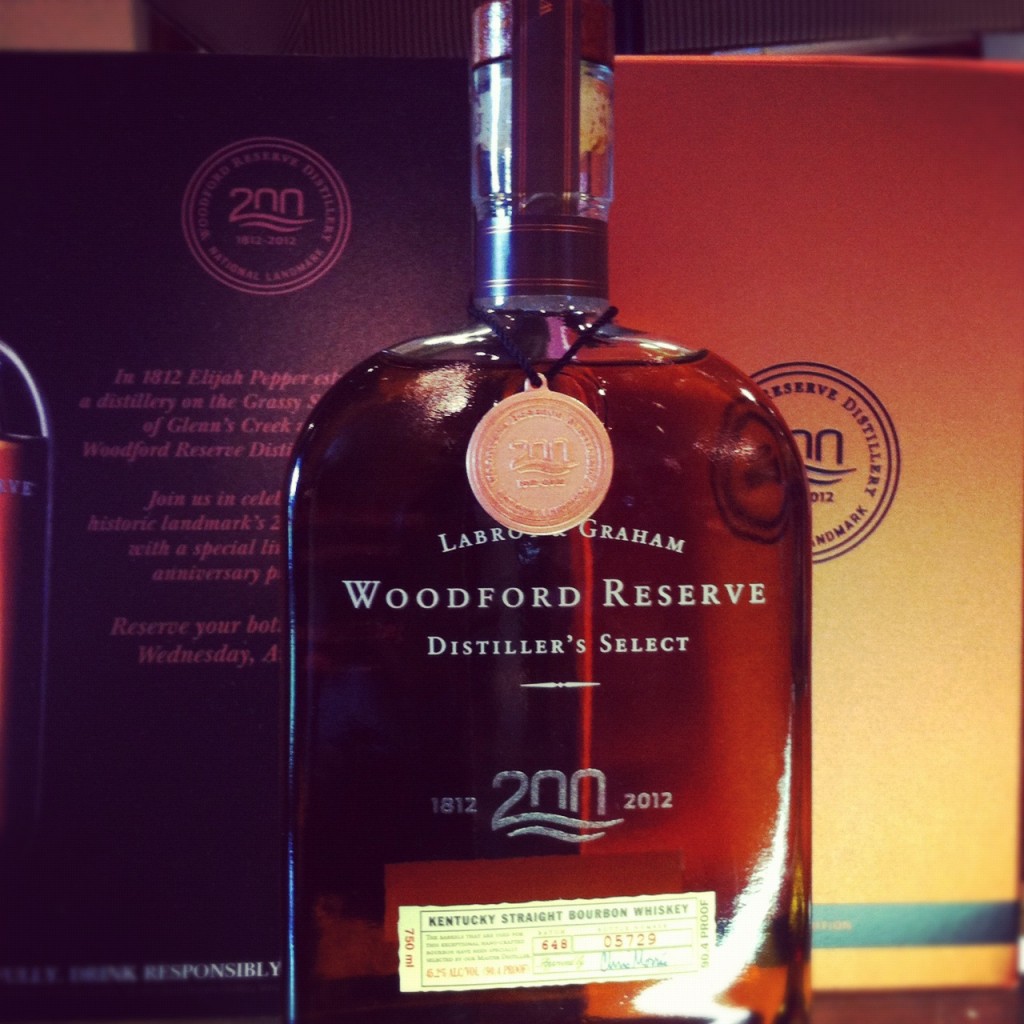 Special thanks to Chris for the article and Brittany Gilbert for providing these photos!