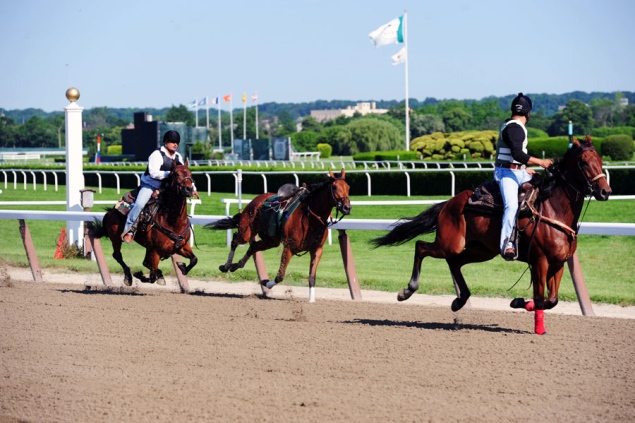 Triple Crown hopeful I’ll Have Another’s chances were almost ruined today as the horse was in potential jeopardy.

Before his morning gallop in preparation for the June 9 race, I’ll Have Another and stable pony Lava Man were walking along the clubhouse turn of the main track soon after the 8:45 am EST track renovation break when a loose horse seemed to come out of nowhere down the track toward ‘ll Have Another. The loose horse barely missed slamming into the Derby and Preakness Stakes Winner.

Derby and Preakness champion trainer Doug O’Neill said. the loose horse went between the rail and I’ll Have Another, and that exercise rider Jonny Garcia told him the horse grazed his boot. The trainer feared a collision was imminent.

O’Neill says he’s seen accidents like that, and “they are ugly.” He says his stomach is “still a little twisted” and he doesn’t want to think about what nearly happened.

As a result of the near miss, the New York Racing Association says they will try to give Belmont Stakes runners a 10-minute gap to train by themselves during these morning workouts.

We’ll continue to follow the story of I’ll Have Another on BourbonBlog.com on the path to the Triple Crown bid, watch our coverage of Kentucky Derby in the video below. Be watching the Belmont Stakes June 9, 2012 in New York.

If you think I’ll Have Another will win this race, go to Top Bet and place an online bet. For the moment, he is our pick and we’ll likely keep it that way because we’re always thirsty for another! 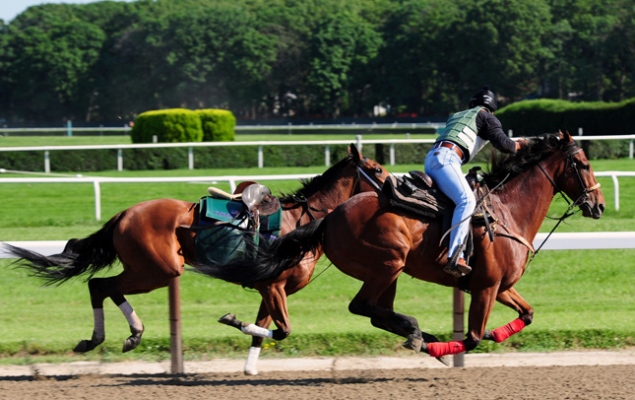 The loose horse nearly slammed into I'll Have Another, barely missing him - Photos of the near accident that almost occurred this morning as I'll Have Another was nearly injured by a loose horse on the track at Belmont Park - Photo Credit Bryan Smith for New York Daily News