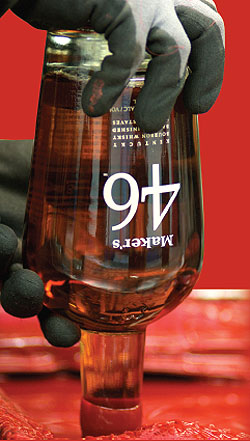 “It so happens that this year’s epic contest is number 46, which is a number that’s near and dear to my heart. It was the number our barrel maker, Brad Boswell of Independent Stave, assigned to the process of adding seared French oak staves to barrels of matured Maker’s Mark. And that was the process that, after great trial and error, led to our first new idea in 50 years: Maker’s 46.”

1. Combine all of the ingredients in a medium pot. Bring to boil on high heat and then reduce to a simmer for 30-40 minutes until the wings are tender and the glaze has reduced, coating the wings.
2. Preheat the oven to 325°F. Remove the wings from the pot and transfer to a parchment lined sheet tray. Bake for 15-20 minutes until the wings begin to color and the glaze becomes shiny. Garnish with minced scallions and apple. Serve immediately.

1. In a wide heavy-bottomed pot, heat the olive oil over high heat. Add the sliced onions and the teaspoon of salt. Sauté the onions, stirring often until they begin to soften, 5 to 6 minutes. Reduce the heat to medium and continue to stir and cook the onions until they begin to color, about another 15 minutes. Add 1/2 cup of bourbon to the pan and stir in. Reduce the heat to low and cook the onions for another 30 to 40 minutes, stirring occasionally, until the onions have colored and caramelized. Remove the onions from the pan and spread on a plate or baking sheet to cool in the fridge.

2. Using a food processor or blender, combine the ricotta and yogurt and process until smooth. Transfer the mixture to a bowl. Fold in the sour cream. Once the onions have cooled, rough chop them briefly. Fold into the mixture and season to taste with lemon juice, sugar, salt and pepper. Serve the dip cold with crudité and chips.