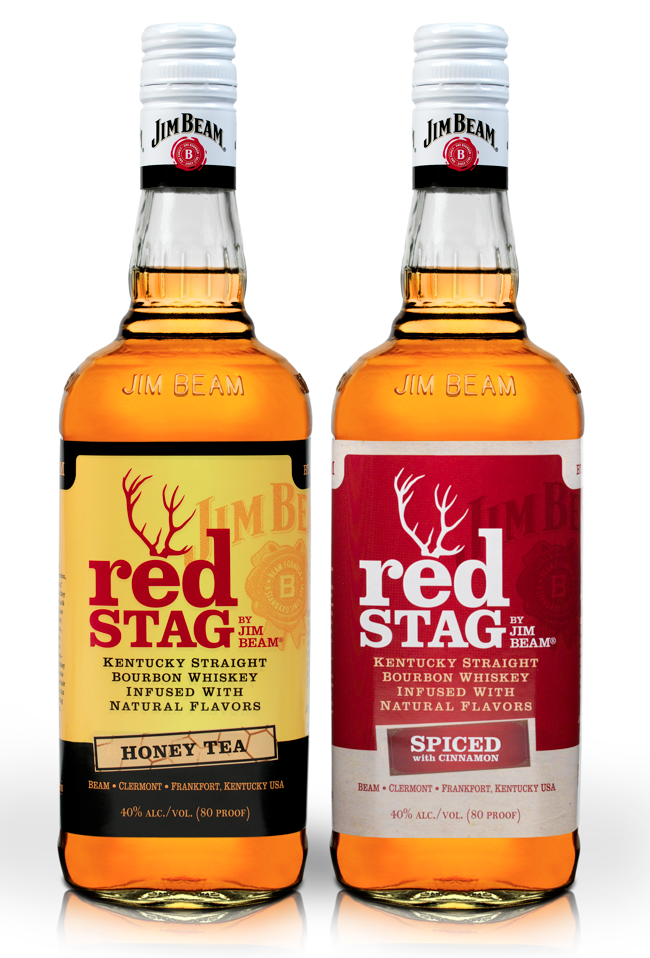 You’ve seen the Kid Rock Red Stag commercials, we were first to tell you about the original Red Stag release in 2009, and maybe you’ve even partied with the original Red Stag Black Cherry. Jim Beam now prepares to release two new Red Stag flavors of Red Stag Honey Tea and Red Stag Spiced Cinnamon in early 2012 at $17.99 per  750 ml bottle.

To preface, the new “Red Stags” are flavored Bourbons. If you dont like this category, you probably won’t care for these and we invite you to debate flavoring Bourbons below under comments. Apparently there is market who enjoys these  because they are being released by a variety of distilleries at an increasing rate.

As these are “flavored Bourbons” both at 80 proof, the question we must ask as reviewers is, “Did it strike the right balance of flavor?” and “Does it actually taste like what it says it will?”

With our whiskey and Bourbon reviews, flavors from chocolate and oak to marizpan and vanilla can be detected and subjectively experienced by a variety of tasters. However, with flavored spirits, the intention of flavor by that distiller is on the label. So, “Do these taste like Honey Tea or Cinnamon Spice? 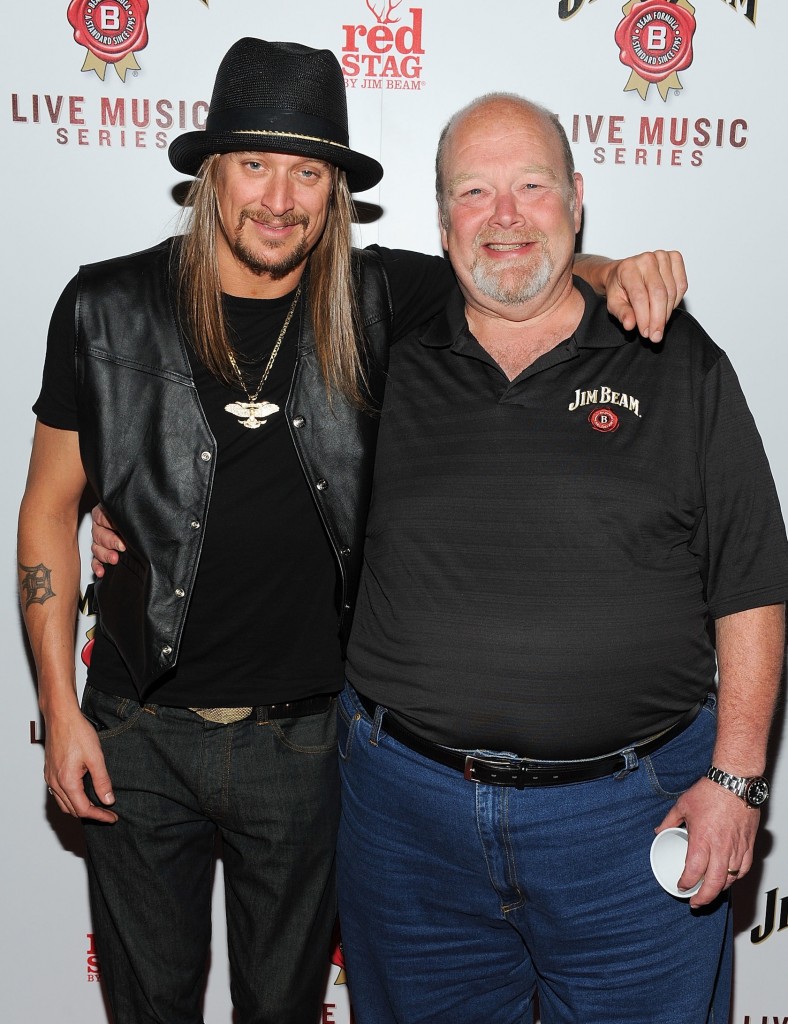 Do we even need to mention the popularity of honey Bourbons whiskeys like American Honey and the category of tea vodkas like Firefly, Deep Eddie to conclude why the two flavors might have decided to get married?

Perhaps smart thinking, but Red Stag Honey Tea falls short of expressing any tea flavors in this marriage. The matrimony in your mouth seems to only taste honey, so not sure where all the tea went. Maybe the Bourbon drank it all? Southerners do enjoy their tea!

On the upside, the texture and flavor is light and fairly approachable. Still, sweetness prevails in the mouthfeel and rather than notes of raw sugar, it is more like a powerful “Splenda” or Equal flavor.

Red Stag Spiced with Cinnamon hits the cinnamon notes more accurately than Honey Tea. It delivers the candy cinnamon red hot candy flavor, so this Stag might  like a “Kid Rock whiskey in a candy store.” There are mild backnotes of mulling spice.

This one might work well in a variety of cocktails and we may play with this a bit to see what we come up with at BourbonBlog.com.

If Beam would have aimed for more a raw, fresh cinnamon flavor right from the stick rather than the candied expression, they would have given the marketplace something new.

We’re giving you some some new cocktail recipes with Reg Stag Honey Tea and Cinnamon below in case they become your thing. If you’ve read this far, maybe they already are!

The new flavored “Stags” don’t deliver enough tempting Bourbon flavor to be a “gateway drug”  for die hard clear spirits enthusiasts to be transitioned into the delightful world of whiskey. We always hope that if flavored whiskeys can succeed in anything, it will be introducing new consumers to sampling whiskey by itself.

Much the same way we drink it with Fred Noe. We’ve been impressed with the new Beam releases Devil’s Cut and Knob Creek Single Barrel Reserve  and shared some with Fred in his smokehouse during Kentucky Bourbon Festival.

Build over rocks in a tall glass.
Garnish with a lemon wedge.

Build over ice in a highball glass.
Garnish with a lemon wedge.

Build in order in a champagne flute.

Build in a heat proof mug. Top with whipped
cream.

Build over ice or serve hot. Garnish with a
lemon wedge.

Place sugar cube in an old-fashioned glass and
soak it with the bitters. Add fruit and muddle
the mixture with a bar spoon; and add the
bourbon and ice cubes. 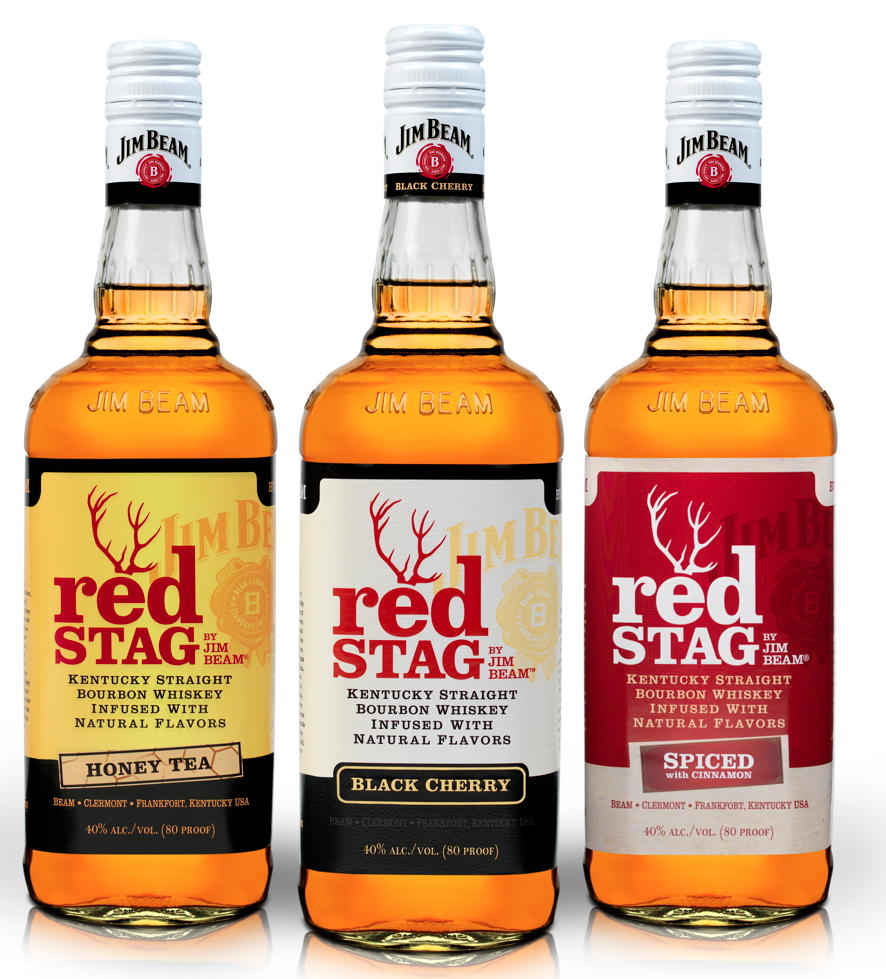