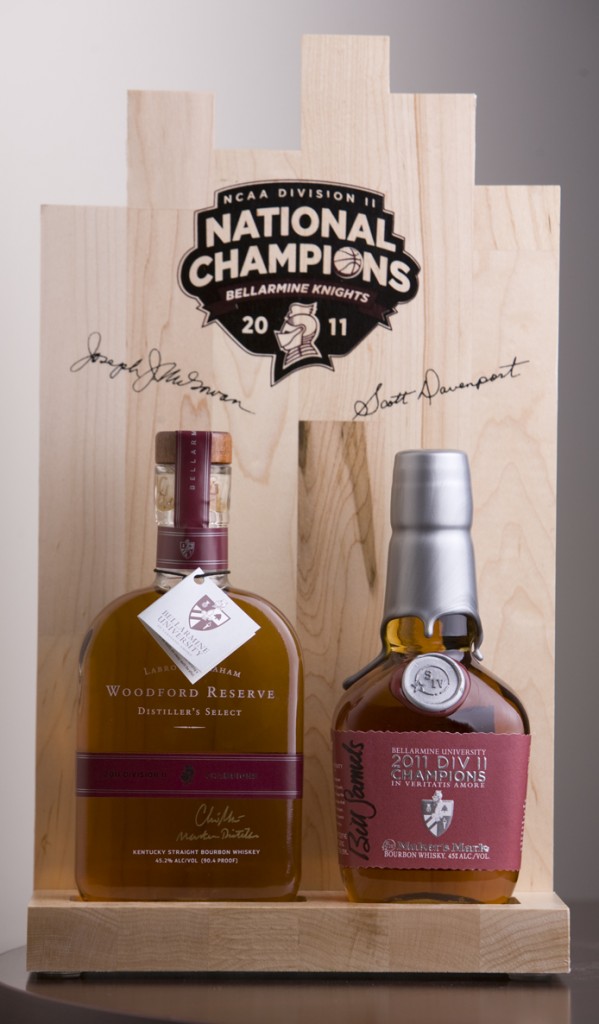 Maker’s Mark and Woodford Reserve bourbon whiskeys have come together for the first time to celebrate a Kentucky champion.

Woodford Reserve’s bottle features a silver neck-tag with Bellarmine’s logo and information about the championship, along with a scarlet band around the bottle that’s labeled “2011 Division II Champions.” The bottle is signed by master distiller Chris Morris, a 1980 Bellarmine graduate.

The Maker’s Mark bottle is sealed with silver wax, and a scarlet label includes the university’s own seal and text about the national championship. The bottle is signed by Bill Samuels Jr., the distiller’s chairman emeritus. Samuels is a member of the university’s Board of Trustees and is leading Bellarmine’s $100 million capital campaign.

Bellarmine fans and bourbon collectors can obtain this limited-edition Bourbons on Saturday, December 10, at 9 a.m., when Bellarmine will dispense with their remaining stock of the bottled sets, available for $200.

These two Bourbon brands have never before been available in the same package.

“The Samuels and Brown families go back a long way together in the whisky business,” Bill Samuels Jr. tells BourbonBlog.com. “We can be fierce competitors, but we’re also close friends. Both families share the belief that a strong private university is critical to the region’s development, so if we’re going to have a strange bedfellow in this fundraising effort, I can’t think of a better one.”

“As master distiller for Woodford Reserve, I never thought I’d see the day when Woodford would be co-packed with Marker’s Mark, one of our fiercest competitors,” Woodford Reserve Master Distiller Chris Morris tells us. “But as a graduate of Bellarmine University, I’m proud to join in helping my alma mater answer the 100 Million Dollar Question so that it can become the leading private university in our region.”

How and where to buy these Limited Edition Bourbons:

WHERE: Frazier Hall, Bellarmine University, 2001 Newburg Rd., Louisville, Kentucky
WHEN: Saturday, December 10, at 9 a.m. being released
COST: $200 for the bottled sets of the two Bourbons