The Colorado whiskey we’ve enjoyed for years and now BourbonBlog.com interviews Stranahan’s Colorado Whiskey of Denver, Colorado during the Breckenridge Craft Spirits Festival. It is a single malt whiskey (100% malted barley) aged in brand new charred American white oak barrels. We get a distinct Charleston Chew flavor on it and notes which are between a Bourbon and a Scotch.

One of the most unique elements of the bottle is that they are signed with hand-written information including, batch number, distilled date and the best part.. the distillers will sign each bottle with a new comment of what music they were listening to at the time of signing or some clever thought! Thus, no two bottles will ever be the same making them all “snowflakes.”

It is rare that you can bottle up the Rockies, or cup your hands in a mountain stream with Colorado’s natural ingredients. Stranahan’s Colorado Whiskey is 47% Alc/Vol (94 proof). 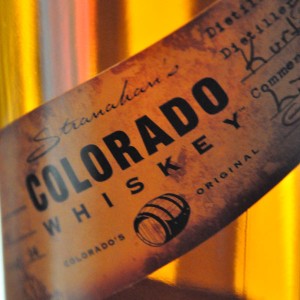