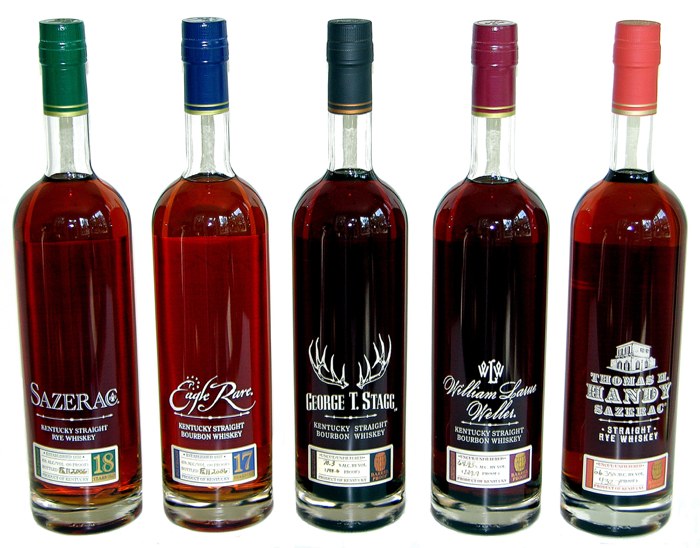 The annual wait is over as Buffalo Trace Distillery will release their 2011 Antique Collection this month in September 2011. The anticipated collection will once again feature five limited-release whiskeys of various ages, recipes and proofs and we’ll be bringing you reviews of each here on  BourbonBlog.com. Each bottle will be around $70..if you can find them.

“It will be hard to top last year’s batch of awards,” Master Distiller Harlen Wheatley tells BourbonBlog.com. “But we think this year’s collection has just as much to offer. I’m anxious to hear if everyone else agrees.”

In advance of our reviews and to prime your palette, here is what we’re told you can expect:

Last year’s release was given a liquid gold award and a 97.5 rating in Jim Murray’s 2011 Whisky Bible. This 2011 rye whiskey release is described as “intense spice with underlying sweetness and dry finish.” Hopefully critics agree this batch is just as good, or better!

The previous edition of this bourbon was honored with a Gold Medal at the 2011 San Francisco World Spirits Competition. The 2011 edition was distilled in the Spring of 1993 and has been aging on the 2nd, 3rd and 6th floors of Warehouses I and K.  After 18 years and 7 months of aging under its belt, it brings to the table notes of leather, vanilla and tobacco.

The 2010 release of this long-time favorite was named “Spirit of the Year” by F. Paul Pacult in the 2011 Spirit Journal.  The 2011 George T. Stagg was found in Warehouses H, I, and K. This uncut, unfiltered bourbon was distilled back in the winter of 1993 and weighs in at 142.6 proof—some bold stuff! This whiskey tastes of espresso, chocolate and vanilla.

William Larue Weller is the Antique Collection’s uncut, unfiltered, wheated recipe bourbon. The previous edition was named “Bourbon of the Year” in Jim Murray’s 2011 Whisky Bible.  The 2011 offering was distilled in the summer of 1998 and aged on the fourth and fifth floors of Warehouses N, O, and P. This William Larue Weller release registers in at 133.5 proof – a lot stronger than last year! It tastes of honey, caramel, light toffee and pipe tobacco.

Thomas H. Handy Sazerac Rye is an uncut and unfiltered straight rye whiskey. The 2010 edition was named “Rye Whiskey of the Year” by Jim Murray in his 2011 Whisky Bible. This year’s Handy was distilled in the spring of 2005, aged on the sixth floor of Warehouse K and weighs in at 128.6 proof.  The flavor has been described as “Christmas cake and allspice. Bold and yummy.”

The Antique Collection was introduced more than a decade ago and has become a cult favorite among whiskey connoisseurs. Since 2000 these whiskeys have garnered numerous awards from such notable publications as Malt Advocate Magazine, Spirit Journal and Jim Murray’s Whisky Bible.