The Kentucky Derby Festival’s annual Great Steamboat Race with Four Roses Bourbon was scheduled to be held during Kentucky Derby 2011, but due to high water is being rescheduled for this Wednesday, June 29, 2011.

Tickets are still available for purchase, call direct at 1-866-636-0068. Ride the Belle of Louisville cost $130 and include food and drinks; Belle of Cincinnati tickets costs $75 (includes dinner) OR Belle of Cincinnati $30(includes cruise only). Spectators are invited to watch for free along the shoreline. 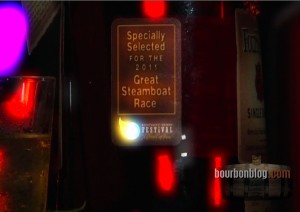 The Four Roses Single Barrel Specially Selected for the 2011 Great Steamboat Race, we have tasted it at BourbonBlog.com and it is delicious!

Watch BourbonBlog.com‘s interview with Four Roses Master Distiller Jim Rutledge about the upcoming Great Steamboat Race. Those who ride on the Belle of Louisville will be able to enjoy plenty of Four Roses Bourbon, including a special Four Roses Single Barrel Selected specifically for the race. Dinner provided by Captains Quarter’s Riverside Grill.

Each boat is assigned two judges, in addition to an overall event judge from the Derby Festival. The winner of the event will be awarded a set of silver-plated antlers to replace the traditional gilded antlers that were presented to the winner in the past. The Awards Ceremony will take place immediately following the race at the Chow Wagon in Kroger’s Fest-a-Ville on the Waterfront.