Maker’s Mark Distillery tells BourbonBlog.com that their 2011 Maker’s Mark Mile commemorative bottle honoring Keeneland Race Course in commemoration of its 75th anniversary goes on sale today! This is just about a week before there will be a special signing of the bottle at Keeneland.

Sales of the specialty bottle will benefit a newly named endowment for the arts honoring retiring University of Kentucky President Lee T. Todd, Jr. and his wife, Patsy. The Lee T. and Patsy Todd, Jr. Development Fund will assist efforts by UK Symphony Orchestra and students from the UK School of Music to take symphony music into public schools and communities throughout the state. This is the third time that sales of special Maker’s Mark bottles have helped fund this program.

“Every year, we strive to make this commemorative bottle and its charitable proceeds about the people and entities that have a positive impact on Kentucky,” Maker’s Mark president and CEO Bill Samuels, Jr. tells BourbonBlog.com.

This year’s bottle will be signed by Bill Samuels, Jr., Lee Todd, President of the University of Kentucky, and Nick Nicholson, Keeneland Race Course President along with Rob Samuels, the incoming President of Maker’s Mark and retired Keeneland President Bill Greely,  on Friday, April 15 at 6:30 a.m. trackside at Keeneland.

The design of the 2011 collectable bottle features Keeneland’s specially designed anniversary logo and notes the 15th anniversary of the distillery’s sponsorship of the Maker’s Mark Mile (gr. IT). Keeneland Race Course opened on October 15, 1936.

Samuels expects about $200,000 from the sale of more than 18,000 bottles statewide, creating funding for this unique program in excess of $1.2 million. 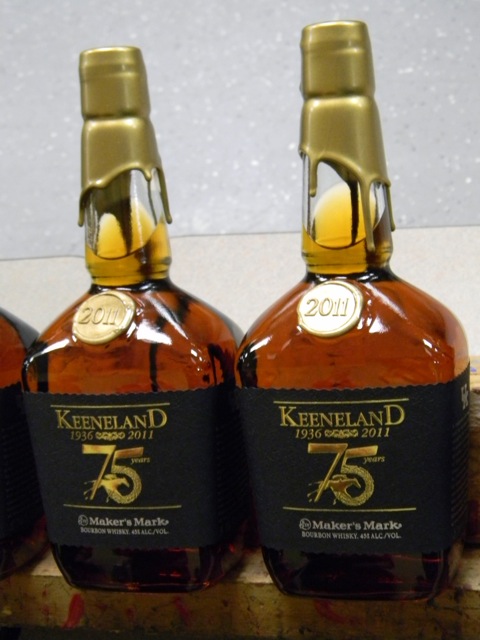 “We are so honored that Maker’s Mark is paying tribute to our anniversary in this way,” Keeneland President and CEO Nick Nicholson tells us. “This sponsorship and all of the money it has raised through the years was the brainchild of Bill Samuels and he deserves a tremendous amount of credit for his ability to take a corporate partnership like ours to new heights.”

“Art and music are passions for Patsy and me. We are humbled that Maker’s Mark, Bill Samuels and Keeneland would honor us in this way by making us part of this special program and by helping take the transformative power of music to children across our state,” Todd said.

All proceeds from Maker’s Mark Keeneland Bottle 75th Anniversary sales will go towards the Outreach Program for the University of Kentucky Orchestra.

– Friday, April 15, 2011 at Keeneland, 4201 Versailles Road, Lexington, Kentucky 40588-1690
– Bottle signing starts at 6:30 a.m. EST
– Bottles go on sale on Friday, April 8, at retail liquor stores across the state.
– Line may begin at Keeneland at 8:00 p.m. on Thurs., April 14, 2011; location will be designated by Security personnel
– Limit 2 bottles per person and only the 2011 commemorative bottle will be signed
– There is no line position holding by people who are in line early; anyone cutting in line may be ejected from the property.
– No alcohol can be brought in to Keeneland for consumption
– No coolers inside the gates
– Violation of policies may result in ejection from the property
-Must be 21 years or older to participate
-Contact your local retailer for more specific information on where to buy the Maker’s Mark Keeneland Bottles as these limited edition bottles will not sold at Keeneland.
– ALSO Make sure to check the Keeneland website the week of April 11th for any additional updates at www.keeneland.com