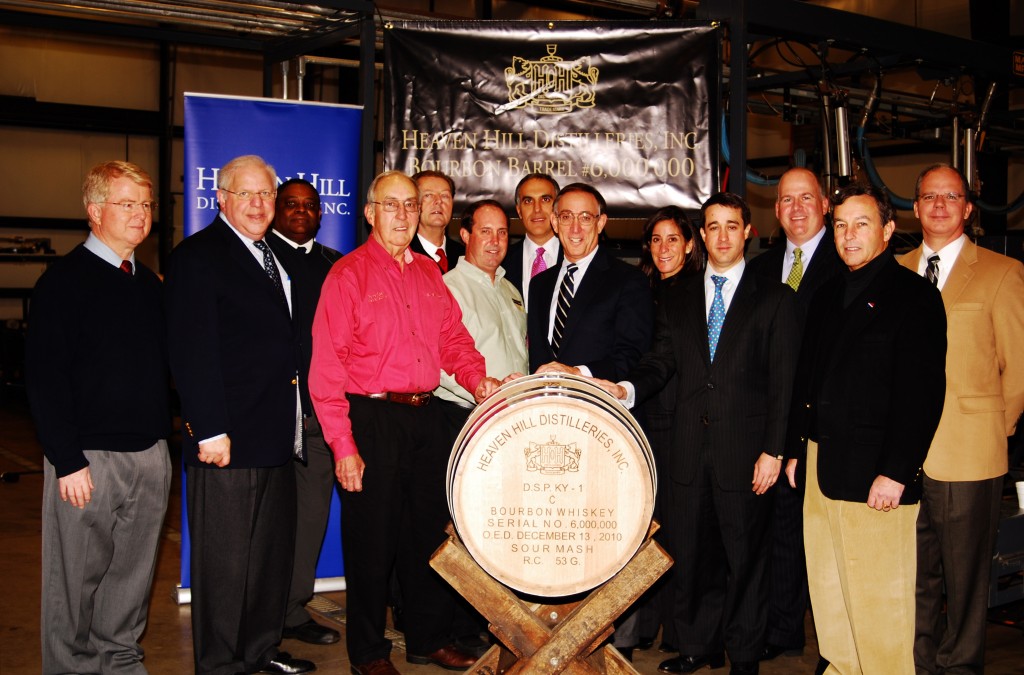 BourbonBlog.com joins Heaven Hill Distilleries, Inc. in celebrating the filling of Bourbon barrel number six million. We congratulate the nation’s largest independent family-owned distilled spirits producer as being only the second continuously operating Bourbon producer to reach the historic benchmark! And in an historic coincidence, the filling of barrel number six million took place on the exact same day, 75 years later, that Heaven Hill filled their first barrel of Bourbon in 1935.

“It is indeed a proud day for our company and our extended Heaven Hill family,” Heaven Hill Distilleries President Max L. Shapira tells BourbonBlog.com. “That the filling of this historic barrel fell on the 75th anniversary of the day that my father and his four brothers filled Heaven Hill’s very first Bourbon barrel makes this day monumentally important for us. And it is made all the more special that it is personally overseen by two generations of my family and two generations of the family of our Master Distillers Parker and Craig Beam.”

No one could foresee the many changes and tremendous growth that lay ahead for both Heaven Hill and the American Whiskey industry in between the filling of their first barrel— ironically on Friday, December 13th, 1935—and their latest milestone barrel, but the company remains true to its original mission as a family-owned and operated independent Kentucky company, the last remaining in the Bourbon business today. Heaven Hill now has over 900,000 aging barrels of Kentucky Bourbon in their inventory, and their flagship Evan Williams brand is the second largest selling Bourbon in the United States and the world.

The 6 millionth barrel was “bunged off” by sixth- and seventh-generation father and son Master Distillers Parker and Craig Beam in a brief ceremony at Heaven Hill’s cistern room attended by company executives and local dignitaries. Congressman Brett Guthrie, Bardstown Mayor J. Richard Heaton and Mayor Elect Bill Sheckles, State Rep. David Floyd and Nelson County Judge Executive Dean Watts attended the brief ceremony and offered congratulations to the company on their latest accomplishment. The barrel was then moved to Rickhouse “Y” where it will rest alongside the other Heaven Hill milestone barrels in a special display where visitors to Heaven Hill’s Bourbon Heritage Center may view them.