BourbonBlog.com recently joined ManTripping.com in Las Vegas for a reason that dates back to 1691. No joke. It’s the HARLEM Kruiden Liqueur Shot Showcase at Rain Nightclub in The Palms. Allow me introduce you to HARLEM. HARLEM comes from a town just outside of Amsterdam called “Haarlem.” While similar to Jägermeister in that it is an herbal liqueur best served as a frozen shot, this one ranks high on our list.

And here is Las Vegas, we are doing some major sampling. In this “Shot Showcase,” there are 14 victorious mixologists and bartenders that have already won best shot made with HARLEM in their respective regions of the country. From Chicago to Las Vegas, each of these cocktailians has a shot ready for us to shoot. Watch the footage that we shot in this video as we downed them all. Sampling the creativity of the country’s most talented mixologists as well as the versatility and incredibly robust flavors of the spirit was a pleasure indeed.

HARLEM is owned by The Nolet Distillery, family-owned since 1691. That is a bloody long time to be producing fine spirits. They claim to be the oldest family owned company “father to son” lineage wise. In Vegas, I meet, interview and drink with the 11th generation Nolet son Carl Nolet, Jr. He is the man that was responsible for bringing Ketel One to the U.S. back in 1990. The Nolets have serious passion for the business with the motto of “always put the best liquid in the bottle.” In addition to passion, the Nolets and the whole HARLEM Family are very hospitable and know how to have a great time! 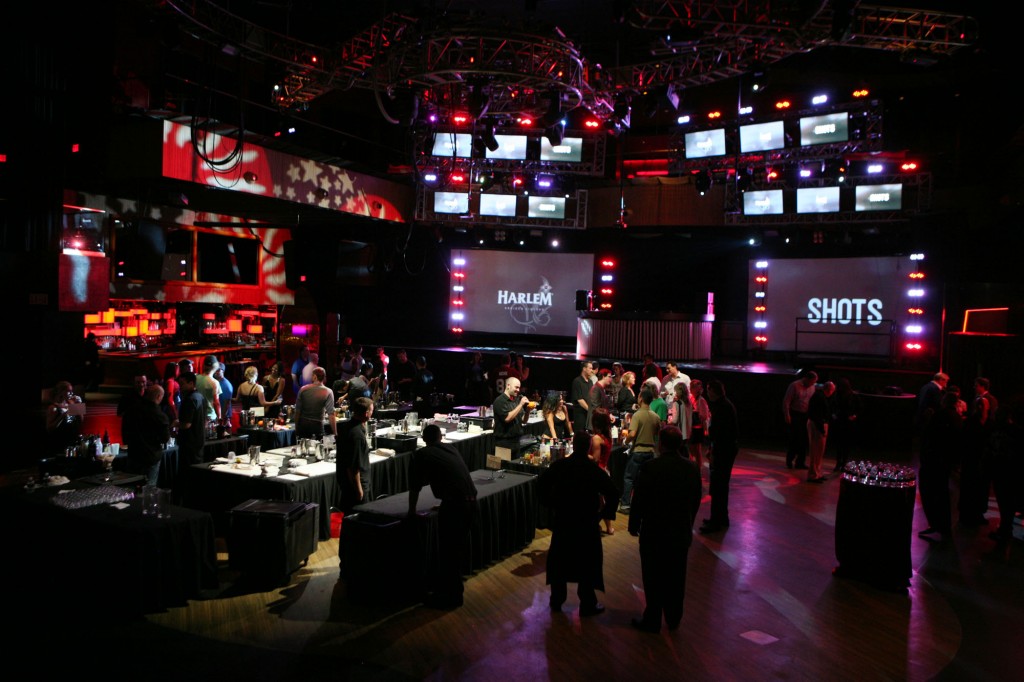 However, for the moment, I’m sticking to the shots. Thus, the moment of truth comes as the mixologists display and sample us on their signature HARLEM shots at Rain Nightclub. They’re already winners in their respective markets, so this is simply the
nation’s best bartenders on showcase. I’m impressed with the variety of ingredients that compliment the HARLEM. From rosemary, Limoncello, chocolate to pumpkin, I’m trying them all because it is our assignment as journalists to capture these by video, photo and articles. I am more of “taster”and “reviewer,” so while it is often that I imbibe, I’m typically not shooting. How will I hold up? Watch the video to find out.

Across the dancefloor, we see the Nolets have recently branded and taken over the VIP room at Rain Nightclub at The Palms. In this “bar within a bar,” the walls are stacked high with HARLEM and ice cold serving HARLEM dispenser machines stand ready to pour shots. I do several more interviews here with with Bill Eldien, President of Nolet Spirits. We begin each interview off with a shot of HARLEM. Why more shots?

And the party continues to go on as from the Shot Showcase, we find ourselves in the club XS at Encore. The Nolets have ordered us up bottle service with their finest including HARLEM, Ketel One Oranje and Citroen. One booth over from us we spot Holly Madison. I was going to offer up a HARLEM, but she seemed quite interested in a gentleman friend.

BourbonBlog.com and ManTripping thank HARLEM, the Nolets, Bill Eldien, Rebecca Janoff, Sally Alfis and M Booth & Associates for their kind invitation and awesome hospitality! And here’s a toast to all the bartenders and mixologists who created masterpieces of shots! All the winning recipes are below in categories by city they won in!

Look for HARLEM as it continues to be introduced to more markets across the US and worldwide. 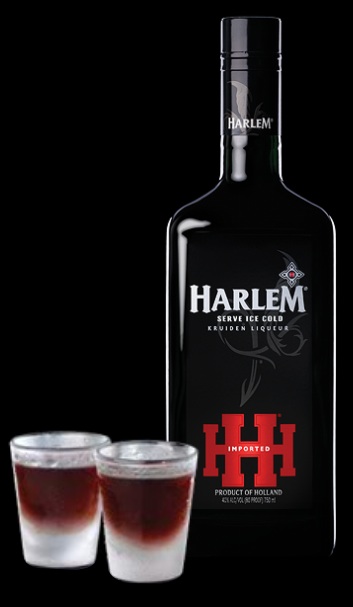 The Red Light, created by Mike Miller of Delilah’s

Shake HARLEM with cherry vodka vigorously with ice and strain into a glass. Add topped of vanilla whipped cream and a cherry on top.

Add 1 oz. HARLEM, equal parts chocolate liquor and Bailey’s, and a dash of Goldschlager into a shaker. Shake vigorously and strain into a glass rimmed with cinnamon sugar.

Mix the above ingredients in a shaker. Shake and pour into a shot glass. Garnish with a blood-orange.

Combine ingredients in a tin. Shake with ice, served chilled.

Add HARLEM, Malibu, Frangelico into a shaker with ice. Shake and strain into a shot glass. Garnish with sugared lemon.

Add HARLEM, espresso & vanilla syrup to a shaker with ice. Shake and strain into a shot glass. In a separate container, shake cream until slightly whipped. Float cream on top of shot.

In a small shaker tin, add the first 4 ingredients. Add ice and shake thoroughly. Twist an orange peel over the shot glass, allowing the natural oils to flavor the inside of the glass. Strain the shot and pour into the shot glass.

Pour HARLEM, Grand Marnier and coke into a shaker with ice. Serve chilled.

Mix the HARLEM, Ketel One Oranje, splash of orange juice and red bull in a shaker. Shake and pour into a shot glass. Garnish with a cinnamon orange. Serve chilled.

Harlem Rage created by Gail Riley of My Ole Man’s