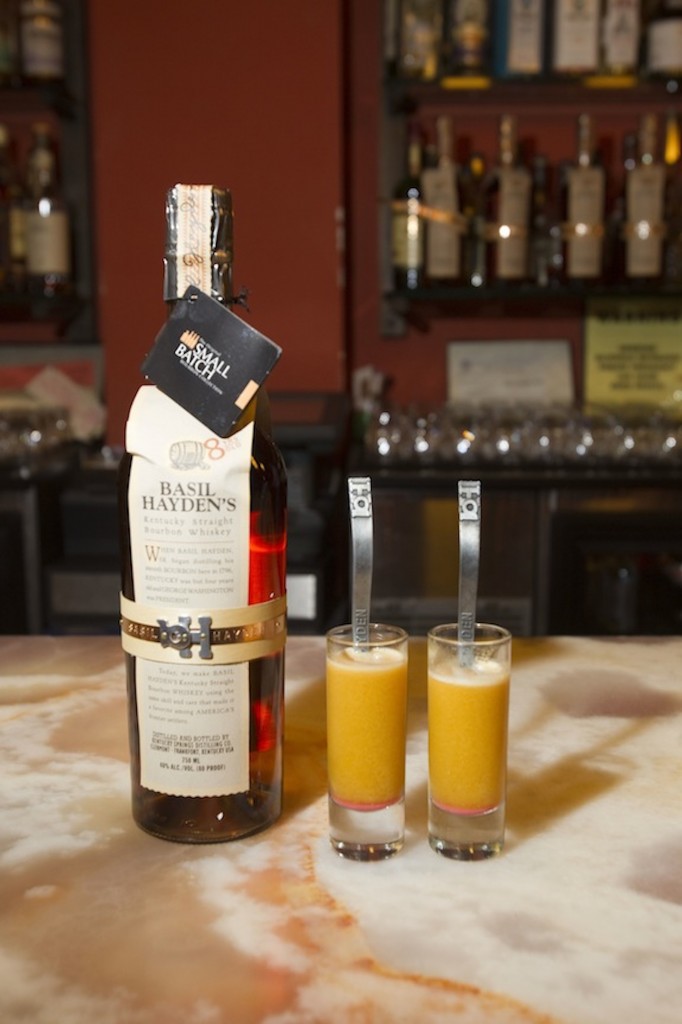 Basil Hayden Bourbon tells BourbonBlog.com they have partners with wd~50’s renowned chef Wylie Dufresne and expert mixologist Tona Palomino at wd~50 restaurant in Manhattan, one of the best New York restaurants, to create some really innovative holiday cocktails which are sharing below and for more, click here: Bourbon Recipes.

Pour the candy cane syrup into the bottom of a martini glass. Measure the rest of the ingredients into a cocktail shaker, and then fill the shaker halfway up with ice. Shake the cocktail for about 10 seconds.

Strain the drink very carefully, allowing it to run down the side of the glass, so as not to disturb the candy cane syrup at the bottom. This will give the drink a layered composition.

Peel the butternut squash and discard the seeds. Cut the squash into long, slim pieces. Juice the squash in a Champion juicer or similar piece of equipment. Place the juice in a pot, skim the foam off, and reduce by two- thirds over a medium flame. Cool the reduction. 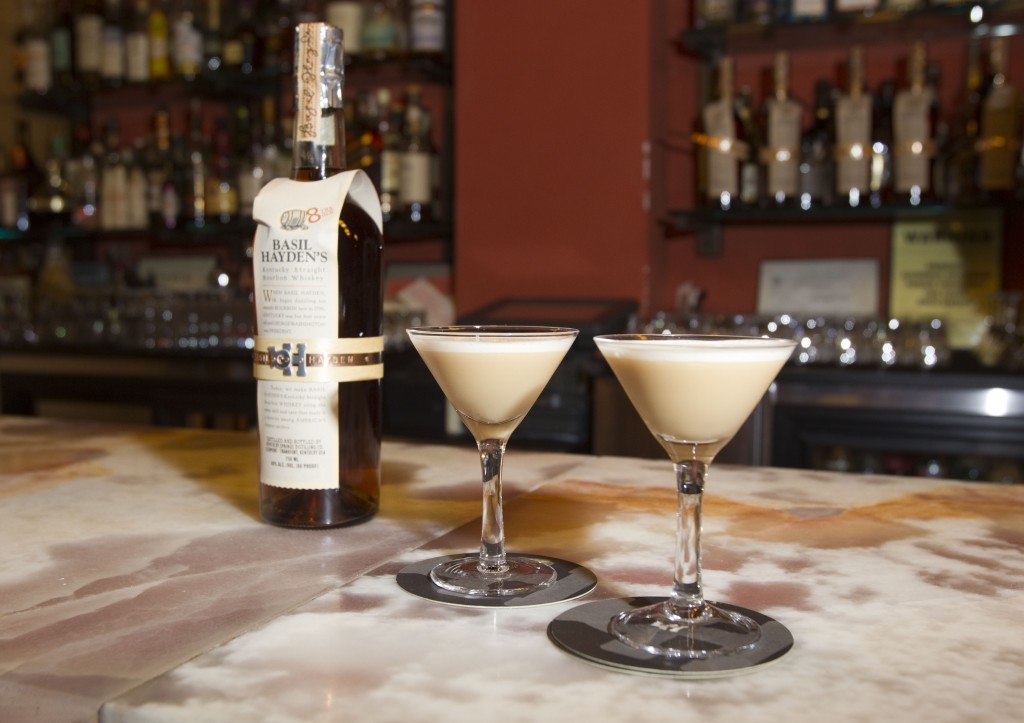 Chill a rocks glass with ice and water. Measure all of the cocktail ingredients into a cocktail shaker,
egg yolk last, and fill it halfway up with ice. Dump ice water out of the rocks glass and place it upside
down on a linen napkin, bar or kitchen towel. Shake the cocktail hard for about 15 seconds.
Strain the cocktail into the glass and garnish with powdered cinnamon.

Cut the butter into small cubes and place in a medium pot. Melt the butter over medium heat. Keep the butter on the fire for a while longer so that the butter starts foaming up. Continuously stir the melting butter. As the foaming begins to subside, some medium to dark-brown specks will begin to appear around the edge of the
butter. At this point, pull the pot off the heat and cool the butter down by placing the pot in an ice bath. Continue stirring the butter every few minutes until you achieve a uniform, paste-like consistency.

Spread the brown butter in the bottom of a shallow container, preferably glass (Pyrex or something similar) or metal. A clean, non-greasy plastic container will also work. Pour the bourbon gently over the butter, and cover it with plastic wrap. Allow this mixture to stand in a cool place for 5 days. Then, strain the bourbon to use it in thiscocktail. Reserve the butter in a refrigerator, for use on pancakes with butter or with maple syrup. 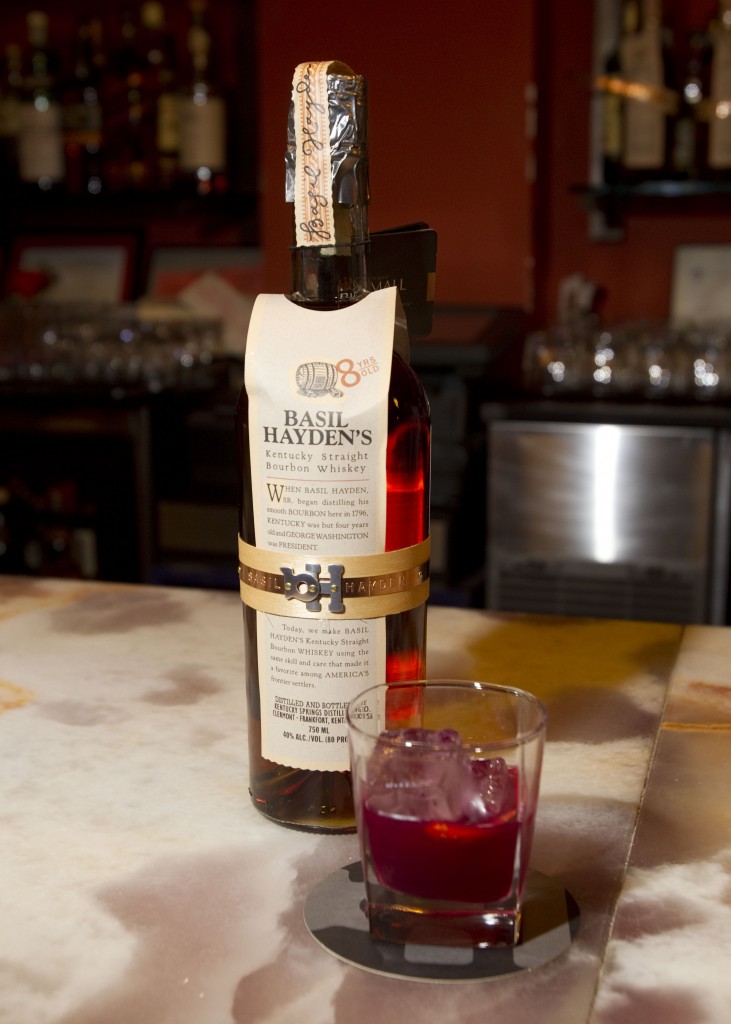 Measure five times the recipe into an empty, one quart soda bottle. Squeeze excess air out of the bottle and cap it with a carbonator. Hook up to a Carbon Dioxide tank and shake for 30 seconds. Refrigerate for at least two hours. Pour each cocktail over ice in a rocks glass, and garnish with an orange twist.

*Bitter Orange Bourbon (Makes 17 Cocktails)
1 pint Bitter Orange Puree
1 750ml bottle Basil Hayden’s Bourbon
To make the bitter orange puree, wash and zest fifteen oranges omitting any of the white pith. Cover the zest with water, bring to a boil, and strain. Repeat 3 times. While the zest is blanching, juice the oranges. Cover the zest with the orange juice and cook slowly until tender when bitten. Puree the zest in a blender using some of the cooking juice to help achieve a smooth consistency. Look for a smooth, thick, and spreadable product. Allow the puree to cool. To make the bitter orange bourbon, spread the puree on the bottom of a shallow container, preferably glass (Pyrex or something similar) or metal. Pour the bourbon gently over the puree, cover with plastic wrap, and allow to stand in the fridge for 5 days. Strain the bourbon and discard the puree.

*Clarified Orange Juice
10 Oranges, juiced
Agar Agar
Weigh the juice, and separate a cup from the rest. Add .2% of the total weight of the juice in agar agar to the cup of juice by using a hand blender in a bowl or a regular standing blender. Once blended together, bring the mixture to a boil and keep on the stove, whisking all the while, for 5 minutes. Allow to cool for 5 minutes, and combine with the rest of the orange juice while whisking. Set the mixture over an ice bath until it has set into a weak, wobbly gel. This will take about an hour’s time. Break up the gel with a whisk and hang over cheesecloth. Reserve the juice for the cocktail, and discard the cheesecloth and its contents. You will be left with a clarified orange juice.

wd~50 opened at 50 Clinton Street, between Rivington and Stanton, on Manhattan’s Lower East Side on April 9th, 2003. The 65 seat restaurant occupies a former bodega and has a full bar. Dinner is served five days a week, Wednesday through Saturday, 6.00pm to 11.00pm, and on Sunday from 6.00pm until 10.30pm. The restaurant also offers private dining in its wine cellar for up to fourteen people.

The chef, Wylie Dufresne, was formerly the sous chef at Jean Georges and in 1999 became the chef at 71 Clinton Fresh Food. wd~50 is the first restaurant where Wylie is both the chef and an owner along with his partners, former employers, Jean Georges Vongerichten and Phil Suarez.

The menu at wd~50 utilizes elements and techniques from a wide array of cuisines. Both Wylie and the pastry chef, Alex Stupak, have garnered praise for their inspired culinary combinations, cutting edge culinary techniques, and innovative use of ingredients. Appetizers range from $15 to $19, entrees from $25 to $37, and desserts $15. The nine-course tasting menu is $140 and a wine pairing is offered for $85.

The restaurant was designed by Dewey Dufresne and Louis Mueller. Louis is responsible for the copper work, including the fireplace, the lighting, the shelving and the door fixtures in the restaurant. The bathroom features a mosaic with an aquatic theme by the artist Tim Snell. The artist Marlene McCarthy designed all of the restaurant’s graphics.

In New York magazine’s 101 Best Restaurants edition (January 9, 2006), wd~50 was awarded four stars (out of a potential five) and was ranked fourth restaurant in New York.