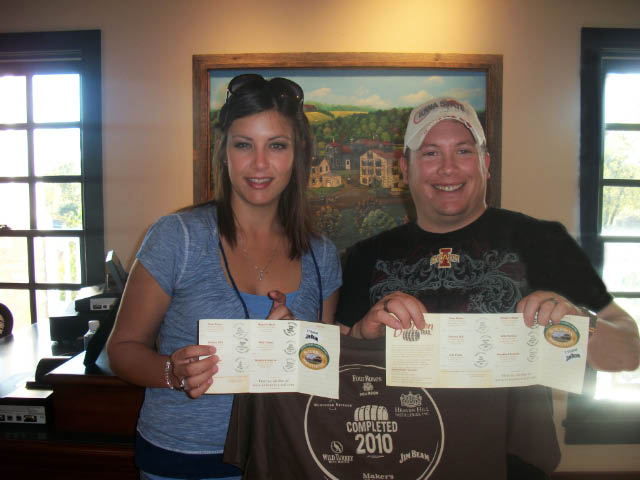 The Kentucky Distillers’ Association tells BourbonBlog.com that the world-famous Kentucky Bourbon Trail tour that a record milestone has been reached – an Iowa man is the 10,000th person to complete the historic journey of all six Bluegrass distilleries.

Seth Harrison, 31, of Pleasant Hill, Iowa, attained this distinction while visiting Kentucky for the Alltech FEI World Equestrian Games. He and his wife, Amber, toured the iconic distilleries with some friends, earning a stamp on their Kentucky Bourbon Trail Passport at each stop.

Harrison received a congratulatory call last week from KDA President Eric Gregory after his winning Passport was received and counted. “That’s awesome,” Harrison said. “It was an unbelievable experience. We enjoyed every distillery and were amazed at the history and tradition.”

Harrison was already well-versed in Bourbon’s agricultural roots, growing up in the Corn Belt and working as a product support specialist for John Deere. “I spend a lot of time on farms, and I know how important corn and grain is to Bourbon,” he said.

“We had an absolutely perfect visit. The trees were changing colors, the sun was shining and you could smell the angel’s share in the air. We couldn’t have visited Kentucky at a better time. This honor just makes it that more special.”

In the fall of 2007, the KDA launched a souvenir “Passport” program to reward visitors who complete the entire Kentucky Bourbon Trail® tour. Members of this exclusive group – from 49states and 14 countries – receive a commemorative T-shirt for their accomplishment.

Seth Harrison will be getting much more for his feat, including:

KDA President Gregory congratulated Harrison and marveled at the skyrocketing number of people making the pilgrimage to the Kentucky Bourbon Trail® tour. Visitors have come from all 50 states and more than 50 countries, he said, with nearly 2 million in the last five years alone.

But only a select group – now 10,000 strong and counting – has finished the entire tour. “We have been overwhelmed by the interest, excitement and dedication of this elite group of adventurers,” Gregory tells BourbonBlog.com.

“They are living proof of what makes Bourbon great. They are passionate about our products, eager to learn more about our rich history and willing to spread the word. We toast their spirit and salute Seth for this outstanding accomplishment.”