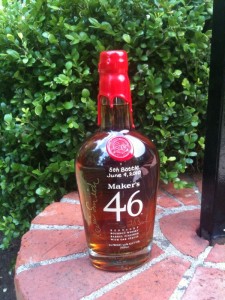 When the staff at BourbonBlog.com first tasted the new Maker’s 46, our heads were awash with ideas for using the newest member of the bourbon family. We finally settled on this recipe as the most appropriate first. The Maker’s and Coke is most likely the single most enjoyed drink in Kentucky. To take the commonplace, turn it upside-down and the present it to the guest in a new form is entertaining, both for the user and the producer.

The soda simple syrup technique was originally designed as a preservation technique for uncommon sodas like root beer, orange or grape. Items not normally found on the bar gun, cans that would be too cumbersome to store behind the bar and whose proportions would inevitably lead to waste (as you would only use ½ of the opened can.) I recommend taking liberties and exploring the technique. You simply are losing the bubbles, adding a nuance of carbonic acid, and preserving the flavor for multiple uses.

Bring Coke to a simmer in a small pot. Add sugar and dissolve. Allow to come to
room temperature before storing, refrigerated.

Place all in mixing tin with ice. Shake for 10 seconds after frost forms outside
tin. Serve up, in a cocktail glass. Lemon twist, to garnish.

2 Responses to “Maker’s and Coke Reengineered”