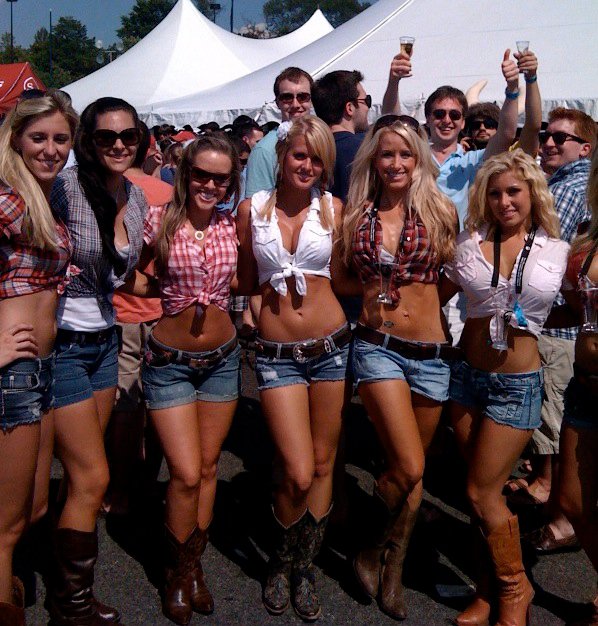 “Brew it. Taste it. Sip it. Pork it,” is the motto. Across the country is where it happens. The Beer, Bourbon, and BBQ Festival describes it all! BourbonBlog.com is a friend of this unparalleled festival as they’ve invited us to be part of it several times this year touring across the U.S.A. This weekend, we partied with at blissful festival was in Washington, D.C. Metro area at a beautiful waterfront area called the National Harbor in Maryland.

Around 11,000 people came to this two day festival in two days to eat, drink and experience some new cocktails during BourbonBlog.com‘s “State of the Union” address on whiskey. Does this sound better than listening to a President ramble on and a crowd of representatives applaud on cue? Somehow speaking about whiskey can lead to some rambling on that Democrats, Republicans, Socialists and “Whiskeyocratistcans” all approve of.

We wanted to “Capitolize” on our appearance in our nation’s capitol with a tribute to an old American favorite in Wild Turkey Bourbon and The Copper Fox Distillery, a new American craft distiller based near D.C. Our Capitol Cocktail recipes that I’m including below below will stimulate your taste buds and leave you lobbying for more pours. Don’t start pouring yet, there is more to address… 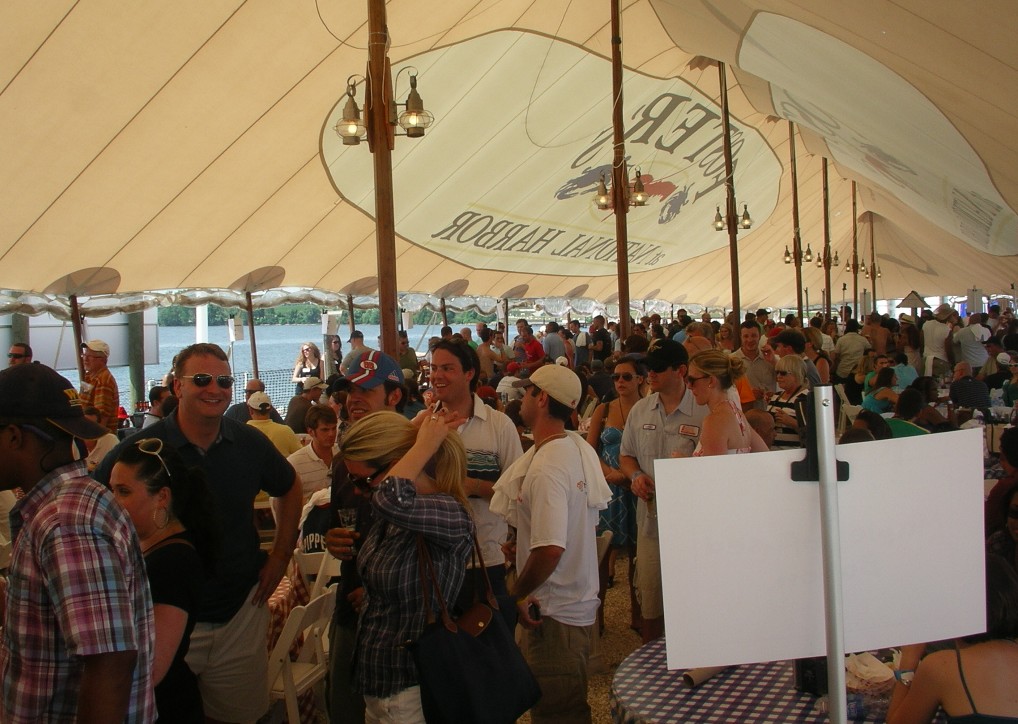 I arrived in Washington, D.C. in time to hit the Friday night hog roast. I enter to a scene of roasted hogs carried on platters ceremonially paraded through a sea of boozed up festival goers. In the wave party goers, some are beginning to dance around the hog while others are following it to get a fresh taste to compliment to the whiskey and beer. As I pick my warm tasting right off the whole hog, I an into my friend Festival Director Greg Nivens who told me that this roast is exactly how they do in his homeland of North Carolina.

Next, I saw our good friend Rick Wasmund, owner and founder of Copper Fox Distillery just down the road in Sperryville, Virgnia. He poured me a sip Wasmund’s Single Malt Whiskey the Copper Fox Rye Whisky which we use in our new D.C. cocktails.

Craft brewers, local BBQ restaurants, cigar vendors, and the Wild Turkey American Honey Girls as I looked into the sun setting on D.C. and could see the Washington Monument. I’m feeling proud to be an American. We should we have invited a few of our nations so called “enemies” to break bread and Bourbon here and discuss their differences. This kinda flavor could end any war. 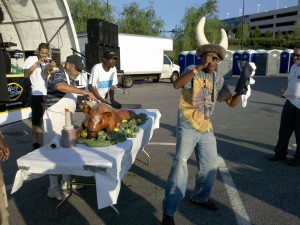 Morgan dances as dinner is brought in at the Beer, Bourbon, & BBQ Festival

I made new friends over some Bourbon, including Morgan who we instantly declared a new member of the “BourbonBlog.com Family.” See Morgan’s picture in the Grand Poobah hat? He was a party indeed! He introduced me to his son Rico and daughters Nicole and Ebony and they began spreading the BourbonBlog love.

There is something Bourbon brings people together that after years of hosting and producing BourbonBlog.com, I still can’t describe. Yes, an overindulgence in any alcohol seems to either divide or closely unite. However, with a simple mention of the word “Bourbon” in America, there is a patriotic, conquering and sheer uniting moment that makes my job priceless.

“Is this guy drinking while writing the article?” you may ask. What do you think? But it is still true!

For Saturday, BourbonBlog.com D.C. Correspondent Adam Boyd came to join us for the speech. Additionally, I somehow persuaded one of my friend Steven to leave South Carolina in the early morning hours drive 8 hours to party all day Saturday with us at the Festival. 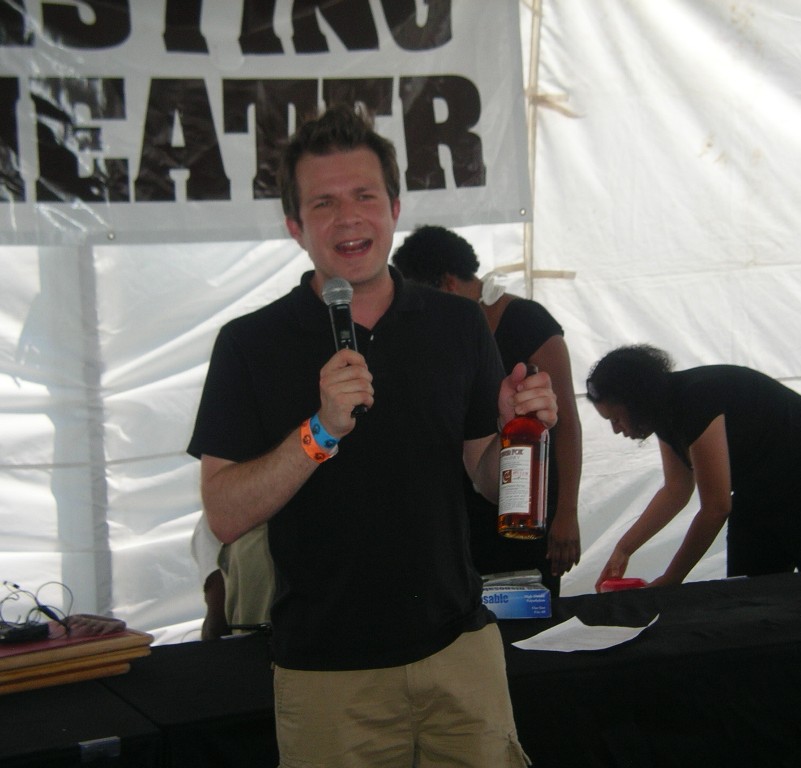 BourbonBlog.com's Tom Fischer in his "State of the Union Address" on Whiskey, holding a bottle of Copper Fox Rye Whisky

The two new cocktails I mentioned earlier are the “Stimulus Package” and “The Lobbyist” created by BourbonBlog.com mixologist Stephen Dennison. Several cocktails The Lobbyist is so delicious it can made anyone who serves it the “instant lobbyist” to the recipient you want to influence. The Stimulus Package has a spicy package of pepper that shines through and accentuates the Bourbon. A few unground and whole peppercorns give enough raw robust character to compliment the Russell’s Reserve Bourbon. Russell’s, made by Wild Turkey, differs greatly from Wild Turkey’s original Bourbon as it is a 10 year old Bourbon with some unique, sweet notes.

After our session, we happy to listen to our friend Rob Hutchins, American Whiskey Brand Ambassador for Heaven Hill speak a bit about Bourbon as he shared some Evan Williams Single Barrel with us.

From hot and humid day on the National Harbor, we toasted to our country from the Capitol with piece of our heritage in rye and Bourbon whiskies. Recipes below and check out all the brew, whiskey, Bourbon and spirts  which we sampled in the menus below.

Dry stir in shaker before adding ice for 45 seconds. After dry stir, add ice and stir until frost forms on the outside of shaker. Strain into cocktail glass being careful not to remove any peppercorns. Garnish with expressed orange swath.

Stir ingredients over ice, strain and serve in Cocktail Glass.

To learn more about the Beer, Bourbon & BBQ Festival and how you can attend the next festival, visit www.BeerandBourbon.com .

Special thanks to Greg Nivens, Sara Hamilton, Kat Arnold,  Anne Fitzgerald, Karen Young and all our friends from Trigger Agency for inviting us and all they do all year long. Also special thanks to Gaylord National Resort Hotel, National Harbor, Maryland! 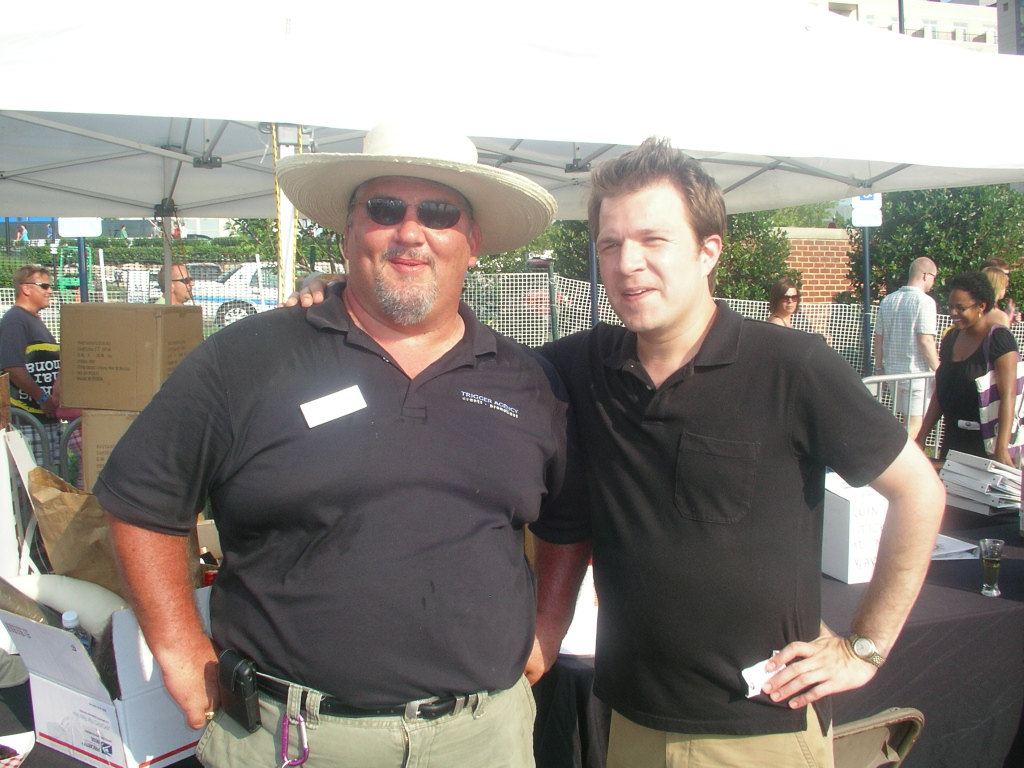 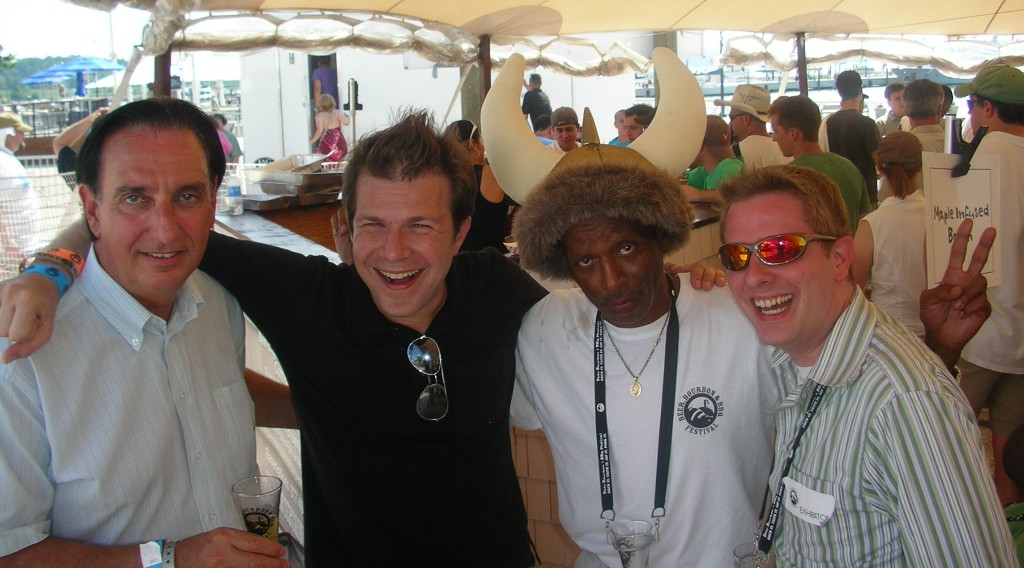 Here is what we were drinking at the Beer, Bourbon & BBQ Festival..

One Response to “Beer, Bourbon, and BBQ Festival, BourbonBlog.com in D.C.”