Recently, these bottlings came across my desk, courtesy Infinium Spirits and Republic National’s Cumberland Division. I sat, pondering what to do with the tequilas held inside these two, beautiful vessels. Then, a thought occurred to me: why not a side-by-side? Not wanting to leave well enough alone, I decided upon a special tasting with two friends- Gayle DeMerssmen, a cocktail enthusiast and Elyse Glickman, Editor-and-Chief of the recently launched Liquid Living Magazine.

The primary aspect separating these two tequilas, I found, was their involvement with wood. The Corralejo kissed the wood at 4 months in a combination of French, American and White Oak. The Casa Noble embraced the wood for the maximum 364 days (to be called ‘reposado’) in new French oak.

The differences couldn’t have been more drastic. In color, the Corralejo was just off-white; the Casa Noble, a light tawny. Both noses had a restrained agave expression. The former possessed a certain crispness, the latter a buttery roundness. On the palate the Corralejo had a citric backnote that also hinted of sea-air, while the Casa Noble expressed butterscotch and vanilla. Tequilas tend to taste predominately like agave- like tequila. You simply can’t get past the fact that they are distillates of a cactus, which is a good thing.

This technique involves tricking the palate into thinking it is tasting something in the actual drink or food by turning on taste receptors prior to the actual enjoyment of the cocktail/dish. Simply put, one enjoys a raw, singular product before then turning attention to the main attraction.

On this occasion, I played to the marriage of citrus and tequilas. Like the tradition of biting the lime before the shot, just enhanced. We ate ‘Extreme Sour Apple Pop Rocks,’ available cheaply online. These not only have the CO2-influenced tactile effect of waking the taste buds up, they also have the mouth-puckering effect of citric acid.

The Corralejo loved the effect, with it’s just-above blanco expression. The Casa Noble didn’t- the vanilla and butterscotch not only were overpowered, they fought it out on one’s tongue. 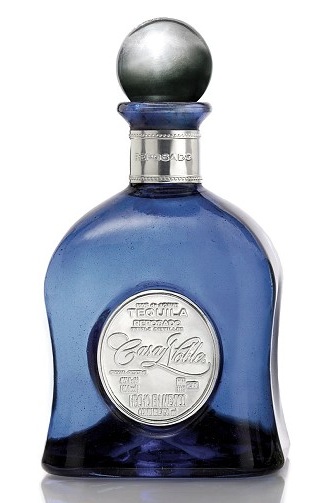 At the end of the day, the three of us found this experiment not only entertaining, but enlightening. As is often the case- when questions find answers, these solutions produce a whole new set of queries. Such is the beauty of the culinary journey.

4 Responses to “Casa Noble vs. Corralejo Reposados: A Tale of Two Tequilas”