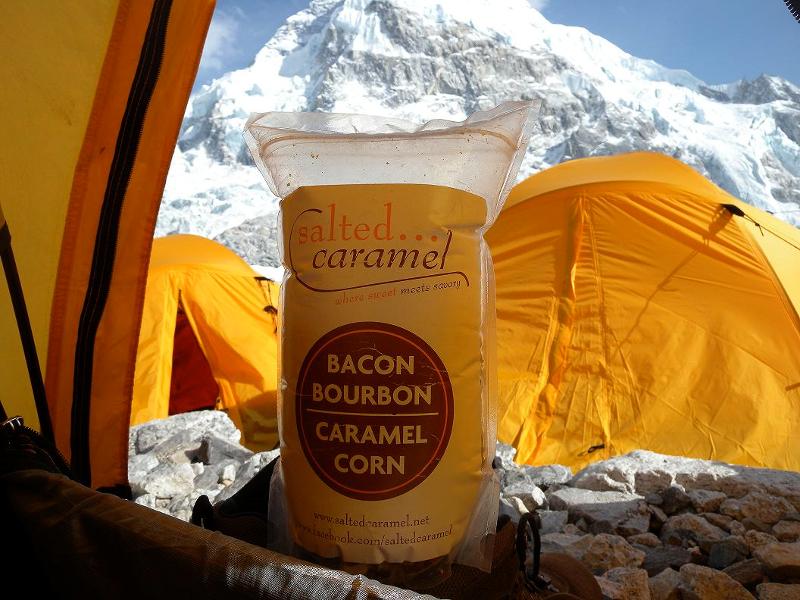 If I ever climb Mount Everest, be damn assured I’ll bring some Bourbon. A few months ago, climber Bob Peterson of Rockford, Illinois trekked to base camp of the world’s highest mountain and enjoyed some Bourbon too in the form of a snack. He took some Salted Caramel’s sweet & savory snack to sustain him and his fellow hikers. BourbonBlog.com recently reviewed the Bacon Bourbon Caramel Corn on this link. If we review a trip to Mount Everest, I’ll let you know.

“You see lots of granola bars and power bars. Pringles are also popular because of their sturdy packaging. My caramel corn was definitely the most unusual snack on the trek and I knew it would be a treat for the group,” Peterson tells BourbonBlog.com.

Unlike the thousands of people who embark on this journey each year, 56-year-old Peterson did it with it with a medical condition. After having colon surgery, Peterson lives with an ileostomy, which is a surgically created opening in the small intestine for the discharge of body wastes. Peterson learned of another climber, Rob Hill, who is on a Seven Summits Campaign to bring awareness to intestinal disease. “This condition doesn’t have to limit you,” Peterson says. In fact, about half the people in his traveling group of 11 have an ostomy. He says this 60 mile hike, 9000 feet of it uphill was a changing experience.

“I was so disappointed because the photos don’t even begin to capture the beauty,” Peterson explains to BourbonBlog.com. Because he knows we love Bourbon, Peterson snapped a photo of Bacon Bourbon Caramel Corn at base camp. “We ate two of the bags on the way up, but one bag made it all the way to base camp. You can see by the photo that the air pressure expanded in the bag. I thought it was going to explode!”

Bacon Bourbon Caramel Corn is indeed delicious for your next climb to Mount Everest or up the stairs to your man cave. Available online at www.saltedcaramel.net in 8oz bags for $12 or the “Pig Out” 24oz bags for $34.