“The taste will come in a few more weeks.” As Kevin Smith explained to us in February in the first video interview ever on Maker’s 46 included below and on this link, this process starts with the original fully aged Maker’s Mark as the base and is then finished in another barrel using specially designed seared seasoned staves from Independent Stave added inside the barrels.

Kevin Smiths tells BourbonBlog.com that this batch of Maker’s 46 will be finished, dumped and bottled near the end of May or beginning of June and should be on store shelves by July. The first release of Maker’s 46 will be 15,000 cases, with 6 per case. No matter how many Bourbons you have as you calculate that, it equals 90,000 bottles across the United States only. “It probably will be tough to find because it is going to sell so quickly,” says Kevin. The expected retail price will be $33-35 a bottle. 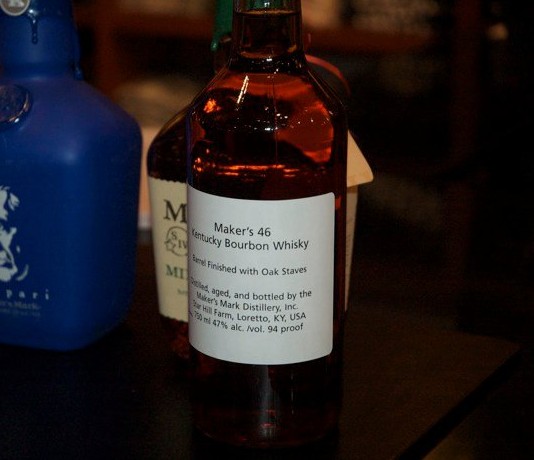 Not the fully finished bottle design. This was the bottle of Makers 46 that Makers Mark Ambassadors could purchase at an event recently

Some Maker’s Mark Ambassadors has the opportunity to purchase a bottle of Maker’s 46 during an Maker’s Mark Ambassador Day at the Maker’s Mark Distillery in Loretto, Kentucky. “As we are holding tasting on this across the country, the feedback is positive. People tell us that they get come cinnamon and spicy flavors along with deep vanilla,” says Kevin. Check out video coverage and story that James Hills of Mantripping.com brought us from a tasting in Chicago on this link.

Kevin Smith tells us that the most of the batches of Maker’s 46 as he originally perfected had been aged the cooler months. The Spring of 2010 in Loretto, Kentucky has been exceptionally cooler, so he is happy with the result now.

Be watching BourbonBlog.com for more updates on Maker’s 46.

Video from February 2010. BourbonBlog.com was the first media outlet to do an on-camera interview and tasting with Kevin Smith on Maker’s 46.

One Response to “Maker’s 46 only months away from release, BourbonBlog.com speaks with Master Distiller Kevin Smith,”