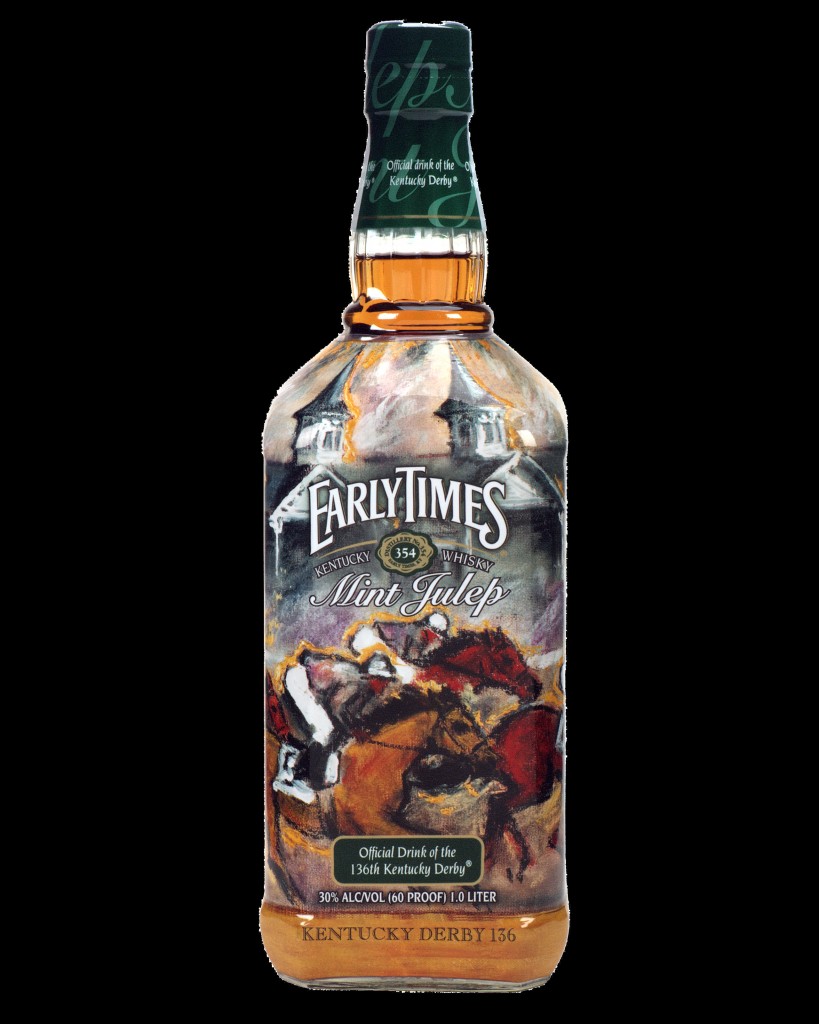 The Early Times Mint Julep tells BourbonBlog.com that they have proudly served “Official Drink of the Kentucky Derby” for the past 23 years. In celebration of this, Early Times Kentucky Whisky continues its tradition with the release of the 2010 commemorative Kentucky Derby bottle.

The 2010 Early Times Mint Julep commemorative bottle holds special significance as the 11th and final in a series of paintings by the inimitable Celeste Susany, whose creations have graced the bottle every year since Kentucky Derby 126. In this year’s masterwork, entitled “A Golden Moment,” Susany adopts a more impressionistic style to capture the essence of this grand race. The scene spotlights the field of contenders galloping along the back stretch while the twin spires stand majestically in the background.

“Celeste’s work captures the true essence and emotion of Derby day and we’ve been so very fortunate to have her as our artist for the past 11 years,” Joe Murray, Brand Manager for Early Times Kentucky Whisky tells BourbonBlog.com. “The Early Times Mint Julep bottle has truly become a collectible among art, horse racing and whisky fans and is a must-have for Derby parties as the perfect way to serve a delicious mint julep in less than ten seconds.”

With 2010 marking Susany’s final year of doing the artwork for the commemorative bottle, Early Times is giving consumers the opportunity to submit their artwork for the chance to be featured on the 2011 Kentucky Derby bottle. Beginning April 20, consumers can log onto www.earlytimes.com/etmjartistsearch to submit their “What Derby Means to Me” artwork, as well as to see official rules and contest details.  The winner will win a VIP trip for two to the 2011 Kentucky Derby, $5000 in cash, along with having their artwork featured on the 2011 Early Times Mint Julep bottle.

“It has been an honor to have the opportunity to do the artwork for the Early Times Mint Julep bottle for the past 11 years,” added Susany. “It’s time to give another artist the chance to have their work displayed for horse racing fans to collect and enjoy.”

During this year’s Derby week, more than 120,000 Early Times Mint Juleps are expected to be served at Churchill Downs. Over the past 23 years, more than 2.5 million Early Times Mint Juleps have been served between Kentucky Oaks and Derby Days at Churchill Downs. This year’s Kentucky Derby will take place Saturday, May 1, 2010 in Louisville, Kentucky.

Launching in April 2010, the newly labeled one-liter pre-mix bottle will be available in limited quantities throughout the United States for a suggested retail price of $14.99.

Celeste Susany was born in eastern Ohio in 1952. She spent a large portion of her life around horses in Santa Anita, Hollywood Park, and Del Mar, California. She received her degree from the Art Center College of Design in Los Angeles. Susany received recognition as a top American artist in the book Racing in Art, by John Fairley, published in 1990. She produced artwork in 1989, 1990, and 1996 for the Kentucky Derby.