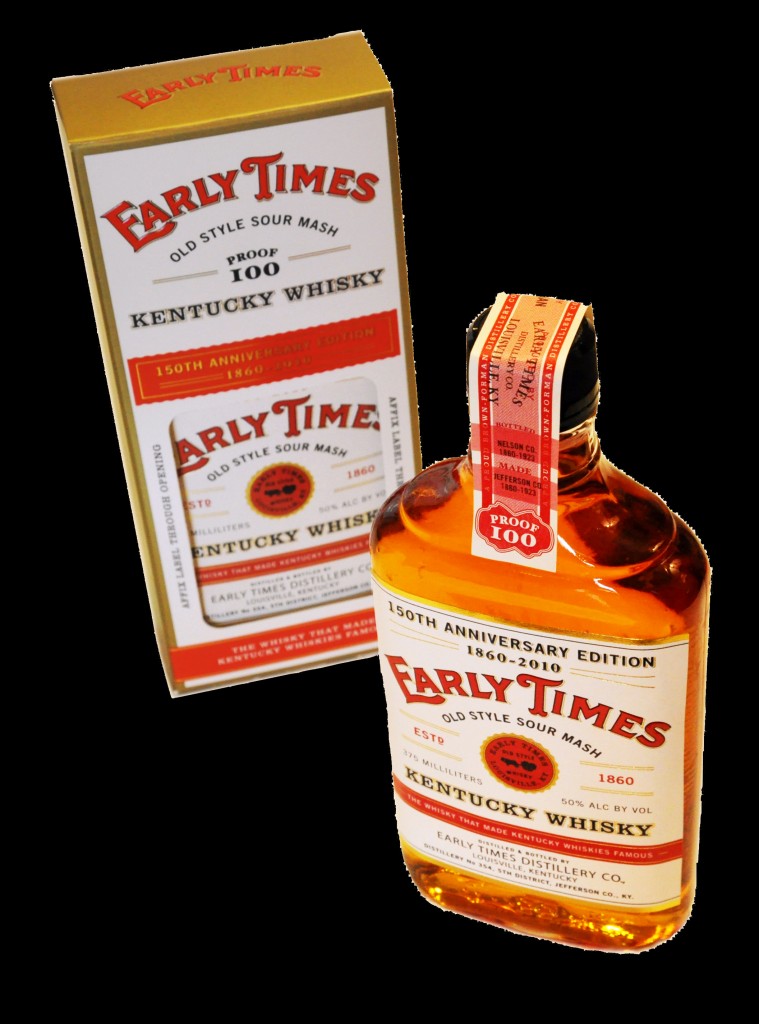 Early Times Kentucky Whisky tells BourbonBlog.com that they have just released a one-time, limited release expression celebrating their 150 anniversary in a 375ml commemorative bottle seen to the left. The Early Times 150th anniversary edition is bottled at 100 proof and carry an Early Times retro 1920’s label. Early Times is usually bottled at 80 proof. The distillery will produce only 3000 cases which will be available in 20 US states at a suggested retail price of $11.99.

First distilled in 1860 in Early Times Station, Kentucky, Early Times is a whisky known for its rich heritage and mild taste profile. Although the year 1860 congers up images of “early times” today, at the time, the brand’s original distillers believed the industry was turning too modern, too quickly, and wanted a brand that captured the “good old days.” Thus, the brand name Early Times was selected to remind consumers of the old-fashioned methods of making whisky – mashing grain in small tubs and boiling the beer and whisky in copper stills over open fires.

Closed by Prohibition, the distillery, brand and barrel inventory was acquired by medicinal whiskey permit holder Brown-Forman Distillers in 1923. Brown-Forman moved the production of Early Times to Louisville, Kentucky in 1935 where it has thrived to this day. Every drop is distilled under the late 1800’s permit number DSP – 354.

This commemorative bottle celebrates the rich history of Early Times’ role as the second oldest continually produced whisky brand in America,” Early Times brand manager Joe Murray tells BourbonBlog.com. “While Early Times is now made with modern methods, its name still invokes images of the good old days and still provides a welcome reward at the end of a hard day’s work. As one of America’s top selling Kentucky Whiskies for the last 60 years it still lives up to its reputation as ‘The Whisky that made Kentucky Whiskies Famous.’

“Early Times 150 is crafted to emulate the flavor profile the brand would have possessed in 1923 when it was acquired by Brown-Forman,” Brown-Forman Master Distiller Chris Morris tells BourbonBlog.com. “Most whisky aficionados who have been treated to a prohibition-era medicinal whisky taste a late bottling. These contain whisky that was aged up to three times longer than the distiller planned. In 1923 Brown-Forman began bottling 5-6 year old Early Times as medicine. This bottling, with its light honey color, mellow oak, brown sugar, vanilla aroma and simple sweet corn, vanilla and faint butterscotch taste bring back the best of a by-gone time – an Early Times to remember.”