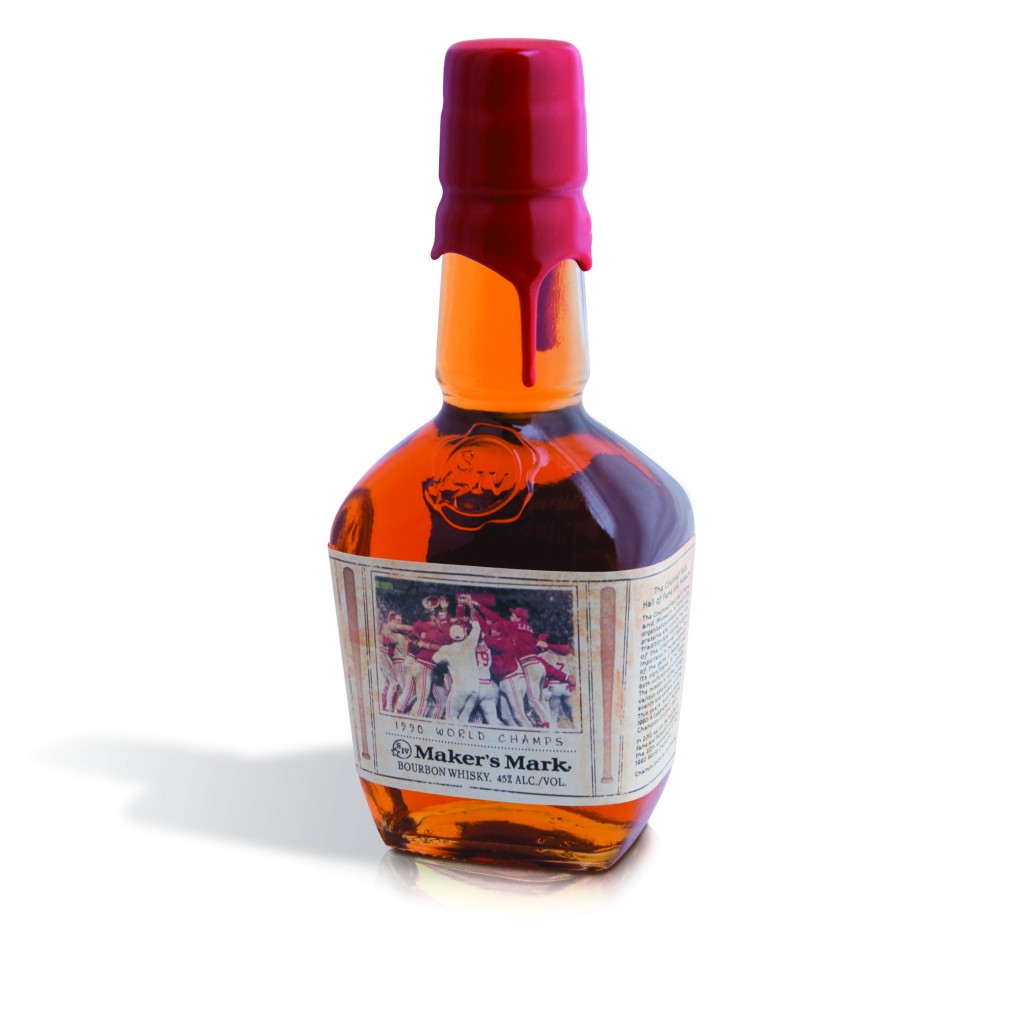 Maker’s Mark Bourbon tells BourbonBlog.com that they are commemorating the Lane’s End Stakes at Turfway Park and honoring an entire team: the 1990 World Series champion Cincinnati Reds. This limited edition bottle is the seventh in a series honoring Turfway’s Kentucky Derby prep race.

The 2010 bottle pays tribute to the 20th anniversary of the Reds’ wire-to-wire season and stunning four-game sweep of the Oakland A’s. The label of the 375 ml bottle features the famous photo, taken by then director of publicity Jon Braude, of the champions celebrating on the field. The bottle is hand-numbered and dipped in red wax.

Maker’s Mark is producing an unprecedented number, 8000, of these commemorative bottles, the most since the series started in 2004. The bottles are to go on sale Friday, March 19 and will retail for about $24 depending on the retail outlet. Proceeds from sales will benefit the Reds Hall of Fame and Museum.

Previously bottles commemorating the Lane’s End Stakes have benefited the Cris Collinsworth ProScan Foundation; the Oscar and Yvonne Robertson Family Fund of the Greater Cincinnati Foundation; the Reds Community Fund and One Way Farm on behalf of Marty Brennaman and Joe Nuxhall, respectively; the Johnny Bench Scholarship Fund and Cincinnati Reds Hall of Fame and Museum; and the Boomer Esiason Foundation.

The bottle signing at Turfway Park is Saturday, March 27, the morning of the Lane’s End Stakes. The signing is from 8 AM to 11 AM at Turfway Park, Gate B. 400 free tickets will be distributed on a first come-first served basis, to persons 21 years and older and one ticket per person. Each ticketholder may bring two of the 2010 bottles to be autographed.

The 39th running of the Grade II Lane’s End Stakes is a 1 1/8-mile race for Thoroughbreds aiming for the Kentucky Derby. With its $500,000 purse, the race virtually guarantees the winner a spot in the Derby field, which is limited to 20 starters.

This year’s Lane’s End Stakes is set for Saturday, March 27, at Turfway Park. Tickets for the race range from general admission at $10 to the Maker’s Mark VIP Tent at $175 and are available by calling Turfway at (859) 371-0200. More information is available at www.turfway.com

The Lane’s End Stakes is sponsored by Lane’s End of Versailles, Kentucky., one of the world’s leading Thoroughbred operations and first among North America’s stud farms for 10 years, seven consecutively. The farm stands such influential stallions as A. P. Indy, Smart Strike, Kingmambo, and two-time Horse of the Year Curlin. Lane’s End is owned by William S. Farish, former United States ambassador to the Court of St. James’s. Farish was honored earlier this year with the Eclipse Award of Merit for outstanding lifetime achievement in the Thoroughbred industry.