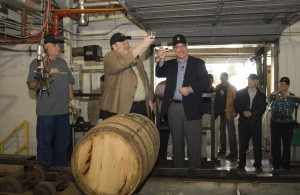 The wait we’ve been telling you about is over. After running out this summer, the next batch of fully aged Knob Creek Bourbon was released from the barrels where it has matured for nine years, now ready to bottle and soon ship to establishments and retailers nationwide. Bill Newlands, president, Beam Global Spirits & Wine, U.S. and Fred Noe, the seventh-generation Beam family distiller, officially restarted production at the distillery, presiding over the opening of the first mature, four-char barrel dating to 2000. (In Bourbon speak, an occasion known as barrel dumping.)

BourbonBlog.com first reported that Knob Creek ran short this summer, due to high consumer demand.  We even visited the Knob Creek House in Clermont during the drought in our episode on this link. Rather than rush production, Knob Creek tells BourbonBlog.com stayed true to the ideals and standards of its originator, the late Booker Noe — Fred Noe’s father, and grandson of Jim Beam – and let this batch, barreled in 2000, reach its full potential.

“We want to thank Knob Creek fans everywhere for their patience and understanding these past months, and promise it was worth their wait,” said Newlands. “Accelerating production and compromising quality, by a few weeks, even days, was never an option we considered. Knob Creek fans have been in touch, many thanking us for doing things the right way. It is very gratifying, and validating.”

“Dad would have been proud today, seeing his vision for Bourbon’s discovery by a new, sophisticated generation come to fruition,” said Noe. “That was his wish in creating a richer, longer aged Bourbon like Knob Creek, and with it, the entire Super-Premium Bourbon category that’s growing so rapidly. Increased demand wound up outpacing our own very solid 2000 forecasts, and created the shortage that’s on the road to ending today.”

While some Knob Creek fans may have recently run short on their favorite Bourbon, they didn’t go wanting for information about the reasons why. Direct communication to the brand’s thousands of Stillhouse members, and advertising in major media like The Wall Street Journal and The New York Times, explained the shortage. The reasons for it were deeply explored in a live webcast we broadcasted the stream of on BourbonBlog.com in September — a first for Knob Creek — where the brand’s resident experts, the Whiskey Professors, answered fan questions about the drought, and the finer points of fine Bourbon craftsmanship. 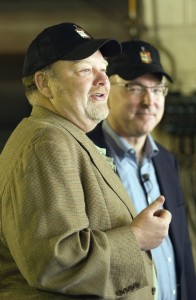 Seventh-generation Beam family distiller Fred Noe, center, and Bill Newlands, president of Beam Global Spirits and Wine U.S., speak before pulling a sample of a new batch of Super-Premium Knob Creek Bourbon after aging nine years on Barrel Dump Day, at the Jim Beam Distillery in Clermont, Ky. The celebration ends the Knob Creek supply shortage, and the brand will soon be back in full supply. (photos credits on this page /Brian Bohannon)