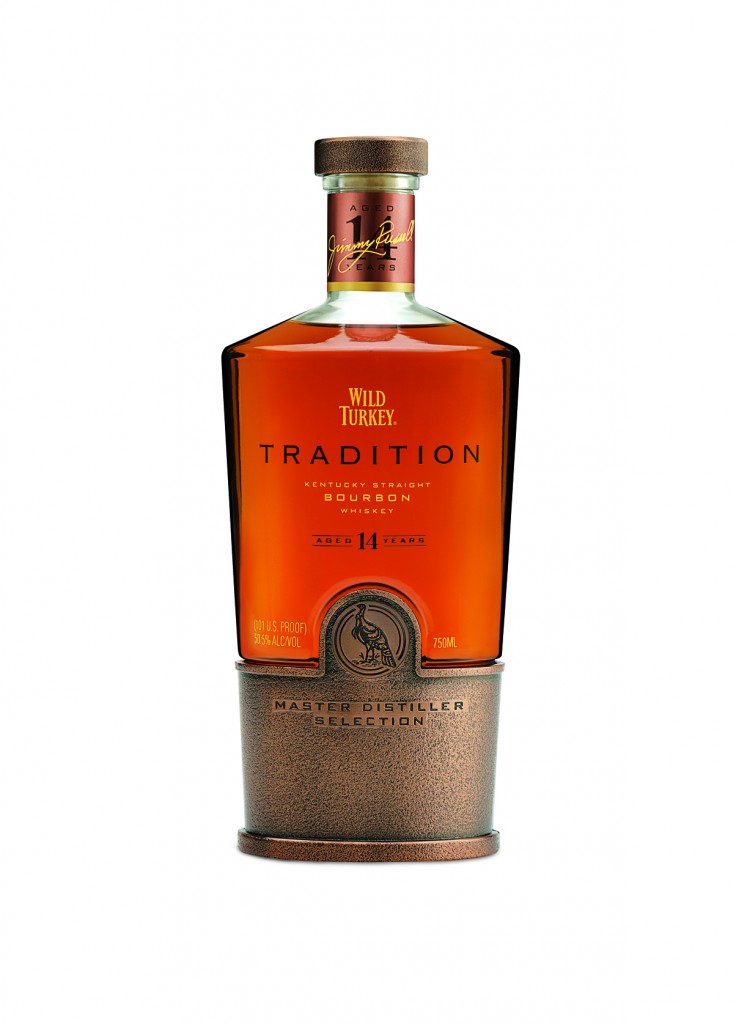 Wild Turkey Bourbon tells BourbonBlog.com that they have just released Wild Turkey “Tradition,” a limited edition, 14-year-old, 101 proof bourbon. This Master Distiller Selection, only the third in this series of special selections, celebrates the history of the Wild Turkey Distillery and the traditions held dear by the people of Kentucky. Only 30,000 bottles are available worldwide and just 14,000 have been allocated to the U.S. Suggested retail price for a 750ml bottle is $100.

Wild Turkey Tradition has been aged for 14 years in new, white oak barrels with the heaviest (and most expensive) level of char. After aging in the “sweet spot” or what’s sometimes called the “center cut” of Wild Turkey’s oldest warehouses, the liquid was bottled at 101 proof in order to retain the true bourbon flavor as has always been done at the Wild Turkey Distillery. The unique packaging combines a traditional metallic base and metal cap with cork stopper with a clean contemporary glass bottle design. It is presented in a special wooden box with an insert describing the rich story behind the product.

“When you’re blessed with a talented father and son team of distillers like Jimmy and Eddie Russell, you want to celebrate their talented touch, and that’s what we’ve done with Tradition,” said Joe Uranga, Vice President of Marketing for Wild Turkey. “With such a limited number of bottles produced, we could easily ask more than $100 for this ultra-premium bottling, but that’s not what Wild Turkey is about. We don’t want to see Tradition become a mythical bottle, but instead we want it to be enjoyed by consumers who truly appreciate a fine, hand-crafted bourbon of such impeccable quality.”

According to Wild Turkey, the nose of Tradition includes warming notes of molasses, raisins and mellowed oak married with the fresh essence of peeled oranges, sweet corn, honeydew melon and luscious vanilla. The taste is bold and crisp, filling the mouth with hints of rye, white pepper and orange zest. This bourbon builds on the warming notes in the nose and develops flavors of toffee and vanilla. The finish is very long with toffee and caramel lingering along with subtle undertones of oak and dried tobacco.